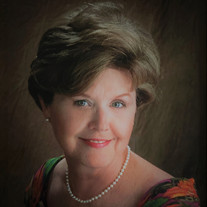 Karen Irene Lyons Wade, 77, went to be with the Lord on Thursday, June 11, 2020 at her home in Lubbock, Texas surrounded by her family. Born on January 20, 1943 in Bristow Oklahoma to the late James Leslie Lyons and Margel Sarah Allen Lyons, Karen was raised in Mercedes, Texas. She married the love of her life, William James Wade, on September 4, 1965. Bill and Karen were inseparable. Karen attended the University of Texas, Austin, and received her Bachelor of Science in Home Economics in 1965. Following Bill’s service in the United States Army, Bill and Karen moved to Lubbock, Texas in 1970 which became their home and where they raised their three sons, Dub, Matt and Ben. While Karen had numerous talents, interests and hobbies including cooking, teaching, gardening, interior design and sewing, Karen’s life was devoted to and focused on her faith and her family. Few things brought her more joy than when she shared the Gospel of Jesus Christ with children whether at home, in school or at church. Her beloved Sunday lunches were a family tradition that will never be the same. Those left to mourn include her husband of over 54 years; son William James “Dub” Wade, Jr. and wife Dottie, and grandchildren Lillian and Leo; son Matthew Lyons Wade and wife Amanda, and grandchildren Olivia and Annabelle; son Benjamin Lee Wade and wife Stephanie and grandchildren Sean and Colter, all of Lubbock, Texas; brother James Leslie Lyons, Jr. and wife Ree of La Feria, Texas; and brother Jack Allen Lyons of Houston, Texas; plus numerous nieces, nephews and a host of other family and friends. A graveside service will be held at the City of Lubbock Cemetery at 10:00 a.m. on Tuesday, June 16, 2020 with a memorial service at 11:00 a.m. in the First Baptist Church of Lubbock, Texas. In lieu of flowers, the family suggests donations in Karen’s memory to one of the many community, philanthropic and faith based organizations in which she served over the years including the Sherick Memorial Home of Lubbock, Bible Study Fellowship International, AK Chapter of PEO, and Lubbock Meals on Wheels or to your favorite charity.

Karen Irene Lyons Wade, 77, went to be with the Lord on Thursday, June 11, 2020 at her home in Lubbock, Texas surrounded by her family. Born on January 20, 1943 in Bristow Oklahoma to the late James Leslie Lyons and Margel Sarah Allen Lyons,... View Obituary & Service Information

The family of Karen Irene Wade created this Life Tributes page to make it easy to share your memories.

Karen Irene Lyons Wade, 77, went to be with the Lord on Thursday,...

Send flowers to the Wade family.