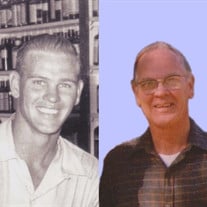 On Saturday, October 10, Keith L. Casner died at the age of 89. Keith was born on November 11, 1930, in Wichita, Kansas, to Earl “Dot” and Viletta Casner. He attended and graduated from Oklahoma State University where he met the love of his life, Patricia “Pat’ Day Casner. Keith and Pat were married in 1953. After obtaining his undergraduate degree, Keith served in the US Army for four years. Upon completion of his service in the military, Keith received his Pharmacy Degree from the University of Oklahoma. In 1962, Keith and Pat moved to Lubbock where together with his father-in-law, Diaz Day, he opened the Day Drug Stores. He owned and operated the Day Drug Stores until 1991. Keith and Pat raised four children in Lubbock. They were loving and devoted parents to Kay Casner Overley, Richard Casner, Dr. Steve Casner, and Amy Casner. His children recall his teaching by example with honesty, integrity, hard work, and selflessness. Keith will be remembered as a humble, generous, kind, and loving man with a quick wit and terrific sense of humor. He was an avid sports fan, and thoroughly enjoyed spending time with his buddies. Keith was preceded in death by his wife, Pat, his parents, and his ‘big brother,’ Earl. He is survived by his four children and their spouses, Kay & Steve Overley, Richard & Penny Casner, Steve & Carmen Casner, and Amy & Gregg Cox, by seven grandchildren, Jennifer Casner, Kamee Casner, Dr. Sam Overley (& wife Maeghan Winn Overley), Olivia Casner, Eric Casner, Keith Cox and Kayla Cox, and four great grandchildren, Sara Casner, Shepard Overley, Wyatt Overley, and Kade Casner. Friends and family are invited to a Memorial Service celebrating Keith’s life at the Sanders Funeral Home chapel on Friday, November 6, 2020, at 2 pm. In lieu of flowers or to honor Keith’s memory, the family requests donations to South Plains SPCA, www.southplainsspca.org.

On Saturday, October 10, Keith L. Casner died at the age of 89. Keith was born on November 11, 1930, in Wichita, Kansas, to Earl &#8220;Dot&#8221; and Viletta Casner. He attended and graduated from Oklahoma State University where he met... View Obituary & Service Information

The family of Keith L. Casner created this Life Tributes page to make it easy to share your memories.

Send flowers to the Casner family.