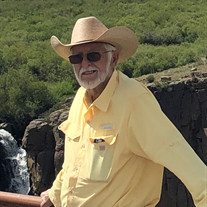 Kenneth Robert Neher, Sr. walked into the arms of our heavenly Father on Thursday, November 19, 2020. Ken was born August 22, 1938 in Holdenville, OK to Joe E. Neher and Gladine Marie George Neher. Ken loved telling everyone that he and T Boone Pickens were the only good things to come out of that small Oklahoma town. Ken was a 1956 graduate of Lubbock High School and attended classes at Odessa Junior College and Texas Tech University in the Engineering Departments. He married Sue McDaniel on December 20, 1958 at Highland Baptist Church, Lubbock, TX. They started a family in 1961. Highland became their family church home where they were active members. Their three children followed their Christian examples and were baptized and were also later married there. Ken was an active Member in the Monterey chapter of AMBUCS. He served in many capacities including Chapter President and was a Big Hatter. He could be found flippingburgers yearly at the South Plains Fair AMBUCS restaurant. He loved to give to others, whether coaching Little League baseball, MOB basketball, Lubbock Girls Soccer or a Challenger Little League Buddy and also an umpire. He was a Boy Scout troop leader and was active with his son, Kenny, in Scouting and YMCA-Indian Guides. He also served in leadership positions with the Independent Garageman’s Association of Texas. He and Sue started an automotive repair business in 1972. He was an Automotive Technician that could fix anything and everything. Some problems and repairs were diagnosed just by listening to the car over a phone. Father’s Day of 1980 Ken was playing soccer on the AMBUCs Team and broke his leg. He was limping around the shop on crutches one day and someone offered to buy his business. He and Sue sold that business and started a new business in sales and service of automotive equipment. Many customers still searched him out to repair their cars after he sold the automotive repair business. We all knew he was the best in the business. Ken had a love of the outdoors and the Colorado Rocky Mountains. He shared his love for camping and fishing with his children and grandchildren, teaching them to respect nature and appreciate God’s beauty. He and Sue were blessed to spend 9summers at Moon Valley RV Park in South Fork, CO beginning in 2010 after he semi-retired. Many friends and family were always welcomed to their campsite with a spot in the shade and a trip to his favorite fishing holes. He is survived by his wife, Sue, of 62 years, a daughter, MelodieDonathan and husband Lyle of Wolfforth, a son, Kenny Neher and wife, Leslie of Lubbock, and a daughter, Marla Nall and husband Ralph of Wolfforth. Other than catching that big rainbow trout, his greatest delights were his grandchildren, Chelsea Donathan of Wolfforth, Kassi Neher Simon and husband Kyle of Excelsior Springs, MO., Kalli Neher and fiancée Justin Kelly of Lawson, MO., Brandt Donathan of Idalou, and Bailey Nall and Coleman Nall of Wolfforth. When the great grandchildren began to arrive the spoiling intensified with Atlee Bell, Chenery Bell and Damian “Enzo” Lorenzo of Wolfforth, Walter Simon, and coming summer of 2021, Baby Simon of Excelsior Springs, MO. He is also survived by a brother, Steve Saunders of Canyon and a sister Melba Jo Johnson of Spearman. He was preceded in death by both parents, and sisters Nelda Brown and Lydia Lennette Lerma and his brother, Jerry Saunders. The family requests any donations be made to the Lubbock Monterey Chapter of AMBUCS for the AMTRYKE program.www.montereyambucs.org

The family of Kenneth Robert Neher, Sr. created this Life Tributes page to make it easy to share your memories.

Kenneth Robert Neher, Sr. walked into the arms of our heavenly...