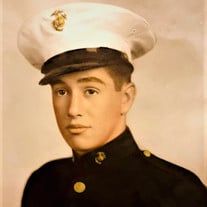 A memorial service for Larry Ormand Holley, 96, of Lubbock, TX will be held at 10:00 a.m. on Wednesday, April 13, in the chapel at Sander's Funeral Home with Bro. Bob Jackson officiating. The family will receive friends on Tuesday, April 12, from 7:00-8:30 p.m. at Sander's Funeral Home. Larry Ormand Holley was born on October 7, 1925, in Lubbock, Texas, to Lawrence and Ella Holley. Larry was the eldest of their 4 children. Larry lived the majority of his life in Lubbock where he attended Lubbock High School. Larry enlisted in the Marines during the year of 1944. He served as a Corporal in the Marine Corps during World War II. Larry was first stationed in the Pacific Arena, where he served as a forward observer for artillery in the 2nd Marine Division. He was later stationed in Nagasaki, Japan where he served as a Military Police Officer. Larry received his honorable discharge from the Marine Corps in July of 1946. Larry met the love of his life, Joyce Maxine Graham, when he returned to Lubbock, and they married on April 24th, 1948. Together they shared 56 wonderful years, up until the passing of Maxine in 2004. From a young age, Larry was devoted to his love for Jesus Christ his Lord and Savior. He received salvation at the age of 12. Larry had a love of Christ and made sure to tell everyone he met how to receive salvation; with many lives being affected in his 96 years. Never knowing a stranger, Larry would talk to anyone he had an opportunity to visit with. He wanted to show the world how God's grace and forgiveness worked in his own life. Larry knew that God would want him to share his plan for salvation with as many people as he could reach. He was an active member and Sunday School teacher of Tabernacle Baptist Church, for most of his life, later moving his membership to Liberty Baptist Church. One of Larry's greatest desires would be for anyone to know the Lord and find salvation. Larry was a talented musician and could play the guitar, violin, mandolin, banjo, harmonica, and keyboards. Larry could also sing quite well and enjoyed performing with his relatives. He was a great mentor to his youngest brother, Buddy Holly, and helped him to start his musical career. Larry also had the opportunity to teach his children and great-grandchildren his love of music. Larry had a passion for being an extreme outdoorsman. During his lifetime he had the opportunity to own and fly many airplanes. He also shared a love of the great outdoors including fishing, dirt bike riding, and arrowhead hunting. Larry loved spending time with family at his cabin in the New Mexico mountains and also spending time on the motorcycle lease that he used just South of Post. Larry was a smart businessman. He was a ceramic tile contractor and owned Holley Tile Company. Throughout his many working years, he had the opportunity to help build and remodel many different buildings in the Lubbock area and many that were even out of state. Larry continued working up into his 80's because he was a social person and enjoyed the work that he did. He also loved and helped many of his faithful employees throughout the years. Larry was called home, by our Heavenly Father, on Thursday, April 7th at 1:10 a.m. He passed peacefully in his sleep. Larry was proceeded in death by his wife, Joyce Maxine Holley, in 2004. Larry was also proceeded in death by his younger brother, Charles Hardin (Buddy) Holley; parents, L.O. Holley, Ella Drake Holley; sister, Patricia Kaiter; brother, Travis Holley. Survivors include his daughter, Sherry Holley (Tommy Scales); son, Randy Holley; granddaughters, Susan Fleming (Jeremy), Jennifer Holley-Tello (Isacc), Rachel Cortinaz (Octavaino); great-grandchildren, Trent Fleming, Trevor Fleming, Kayleigh Cortinaz, & Ryleigh Cortinaz; nieces, Travetta Johnson, Cindy Graves, Gina York, and Ingrid Kaiter; nephew, Eddie Weir. The Holley Family would like to express our sincerest gratitude for all of people that played an important role in the care of Larry throughout his life.

A memorial service for Larry Ormand Holley, 96, of Lubbock, TX will be held at 10:00 a.m. on Wednesday, April 13, in the chapel at Sander's Funeral Home with Bro. Bob Jackson officiating. The family will receive friends on Tuesday, April 12,... View Obituary & Service Information

The family of Larry Ormand Holley created this Life Tributes page to make it easy to share your memories.

A memorial service for Larry Ormand Holley, 96, of Lubbock, TX...

Send flowers to the Holley family.