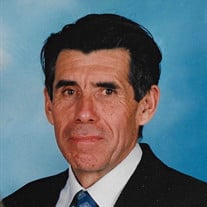 Lawrence "Larry" Magri passed away on December 9, 2021, at his nursing home in Lubbock, Texas. He was born on January 21, 1934. He was preceded in death by his mother and father, uncle Victor Magri, two brothers, Alexander Magri and Fernando Magri and his son Angelo D. Magri. He is survived by his sister Sandra Johnson, his son Victor Magri, daughters Kate Roden and Kristine Magri, Daughter in Law, Shannon Kennedy Magri and three grandchildren, Ezekiel, Jack and Emma Magri. Larry grew up in New York City, where he discovered an early love for airplanes and aviation. He was an Air Force veteran of the Korean War, where he served as a communications officer. He graduated from Northrop University and continued his life-long quest for learning at Wichita State University, Seward County Community College, and the Liberal Area Vo-Tech. He began a long career as an aeronautical engineer in 1962. He was the head of the small plane engineering division for Beech Aircraft for twentyfive years in Liberal, Kansas. Larry was an entrepreneur owning clubs, bars, liquor stores and restaurants at various times in his career. He became a certified flight instructor, and got an A&P certification, largely so he could certify his own airplanes. His greatest love was repairing and rebuilding (to better than factory specs) his various aircraft and hosts of other people's airplanes around Southwest Kansas. He was always enormously proud to be an integral part of Liberal, Kansas. He loved the Mexican food, the diversity of the people, and he took huge satisfaction from the aircraft community which exists throughout Kansas. A come and go memorial service will take place on Tuesday, December 21, 2021, at the Mid-America Air Museum, 2000 W. 2nd Street, Liberal, Kansas 67901 from 12:00 - 2:00 PM. Interment will take place later at Fort Rosecrans National Cemetery, San Diego California where he will be interred near his brothers, Fernando and Alexander who both were killed in the Korean War. The family is asking for donation of a beanie or stocking cap at the memorial service.

Lawrence "Larry" Magri passed away on December 9, 2021, at his nursing home in Lubbock, Texas. He was born on January 21, 1934. He was preceded in death by his mother and father, uncle Victor Magri, two brothers, Alexander Magri and Fernando... View Obituary & Service Information

The family of Lawrence Jude Magri created this Life Tributes page to make it easy to share your memories.

Send flowers to the Magri family.