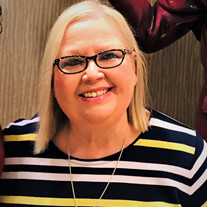 DALLAS - Lisa Ann Hoover (Armstrong), 61, formerly of Abilene, passed away on June 21, 2021, at Baylor Scott & White Hospital in Dallas. Thoughtful and kind with a generous heart, Lisa was a dear friend, a caring nurse and, most importantly, a loving mother. Lisa was born Sept. 27, 1959, in Crosbyton, Texas, to H.S. Armstrong of McAdoo and Nelda Armstrong (Ellison) of Crosbyton, later of Lubbock. Lisa was raised in Lubbock and graduated in 1977 from Monterey High School. She attended Kilgore College in East Texas and earned an associate's degree in nursing and later obtained a Bachelor of Science in Nursing from Angelo State University. Lisa married John Hoover in 1978 and began work as a nurse in the emergency room at Good Shepherd Hospital in Longview. She also briefly worked at Park Place Hospital in Port Arthur. In 1988, Lisa moved to Abilene and began her career at Abilene Regional Medical Center. She would work there for more than 30 years as an RN, BSN in the emergency room, education department, day surgery and most recently as a clinical documentation improvement specialist reviewing physician charting, before retiring when she became too sick to work. In June of 2019, Lisa was unexpectedly diagnosed with Stage 4 mantle cell lymphoma, an aggressive, rare type of non-Hodgkin lymphoma, a form of cancer that affects the bloodstream. She fought courageously and gracefully for two years as a team of doctors from Texas Oncology tried numerous rounds of chemotherapy and two bone marrow transplants. Lisa loved being a nurse and a nurse educator, a role she continued even as a cancer and bone marrow transplant patient, befriending every nurse who took care of her. Her favorite job was not as an RN, but as a mom - as she would say, she was a "band mom, cheerleader mom, tennis mom, ballet mom, soccer mom, room mom," etc. She was a beloved and cherished mom to not only her own kids and their spouses, but to many of their friends throughout grade school, high school, college and adulthood. Lisa is preceded in death by her sister, Cindy Armstrong Brown, and her mother, Nelda Armstrong. She is survived by her children, whom she called her "four kids": Jared Hoover (Staci Cates) of Cedar Park and Brittany Hoover Magelssen (Tommy) of Dallas; her dad and stepmother, H.S. and Linda Armstrong of Weston Lakes; brother Gregg Armstrong of Fort Worth; sister Leslie Rudd (Scott) of Rowlett; sister Lindsay Armstrong (Scott) of Houston; great-aunt, Twila Aufill of Lubbock; nephews Gram Armstrong, Travis Armstrong (Tiffany), Justin Armstrong (Jeanie), Seth Swinford, Kerrigan Rudd and Keaton Rudd; and seven great nieces and nephews. The family would like to thank the care team and support staff at Baylor Scott & White hospital and Texas Oncology. A memorial service is scheduled for 11 a.m. Saturday, June 26, at First Central Presbyterian Church in Abilene. The family requests that unvaccinated attendees wear masks. Lisa requested that in lieu of flowers, memorial donations may be made to the First Central Presbyterian Church youth group, the local youth group of your choosing or the Awesome Cooper High School Band in Abilene. (To support the CHS band, make checks payable to "Cooper Band Boosters" and mail them to: Cooper High School, 3639 Sayles Blvd., Abilene, Texas 79605.)

DALLAS - Lisa Ann Hoover (Armstrong), 61, formerly of Abilene, passed away on June 21, 2021, at Baylor Scott & White Hospital in Dallas. Thoughtful and kind with a generous heart, Lisa was a dear friend, a caring nurse and, most importantly,... View Obituary & Service Information

The family of Lisa A. Hoover created this Life Tributes page to make it easy to share your memories.

Send flowers to the Hoover family.