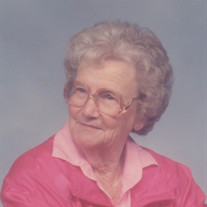 Lois Mae Minnick, 96, of Lubbock TX, passed away April 19, 2021. She was born November 03,1924 in Bogata, TX. She was married to A.W. "Doc" Minnick on December 31, 1945. They celebrated 50 years of marriage before his passing. They were members of Sunset Church of Christ. Lois, or "Pat" to her family and friends, was a homemaker. She raised four children of her own and helped raise two of her grandchildren. She was an amazing cook and would bake treats to give as gifts to neighbors, teachers and delivery people. She was very artistically inclined. She would paint ceramics, arrange flowers and sketch trees. She was an active member of the PTA while her children were in school. While serving in the PTA she was part of a delegation that fought and won having crossing guards at the schools throughout Texas. Pat and Doc lived for a time in their beloved mountains in New Mexico. While living there she learned how to cook authentic Mexican food. In addition to what she was taught, she could replicate any dish she put her mind to. She was our star in many ways whether it was her cooking, painting, singing or the skits at the family talent show. She was survived by son Wayne and wife Kenra Minnick of Shallowater TX; daughter Gail and husband John Smiley of Lubbock TX; son Gene and wife Janette Minnick of Lubbock TX; and son Skeet Minnick of Lubbock TX. Grandchildren Brandon Smiley, Daphne Minnick, Jennifer Hamm, Amy Minnick, Nikki Lozano, Brittaney Minnick, and 9 great grandchildren, and four great-great grandchildren. She is also survived by two beloved sisters-in-law Katherine Minnick and Wanda Bradley and many nieces and nephews. She was proceeded in death by son Jerry Tompkins and three brothers and two sisters. Funeral arrangements will be held April 23, 2021, at 10:00AM at Sanders Funeral Home with graveside services at 1:30 in Fluvanna TX. Visitation will be April 22, 2021 from 7:00 - 8:30PM.

The family of Lois Mae Minnick created this Life Tributes page to make it easy to share your memories.

Send flowers to the Minnick family.