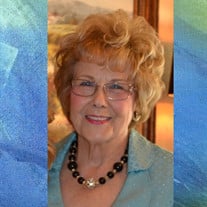 Lucille Toliver Pickering, 88, passed away peacefully in her sleep at her home on November 13, 2020. She was born on January 29, 1932, in Weinert, Texas, to Joseph Luther and Ardonia Toliver. She graduated from Weinert High School in 1950 and was crowned Miss Haskell the same year. On March 9, 1951, Lucille married the love of her life, Raymond Pickering. They eventually moved to Lubbock for Raymond to begin college at Texas Tech. With Lucille’s support, Raymond worked at Simmons Machine and Tool, Inc. and built the company into a major pump manufacturer. While Raymond spent many hours working to build the company, Lucille focused on raising and nurturing her three sons. Lucille was a wonderful, loving mother and grandmother, and was fondly referred to as “Gran.” Her many civic achievements include over 20 years of volunteering for the St. Mary’s Hospital Auxiliary Club where she served a term as President, and her membership to the Lubbock Women’s Club. Lucille and Raymond traveled extensively around the world, and also enjoyed traveling in their motorhome across the United States and Canada. The couple fell in love with Ruidoso, New Mexico, and made many precious family memories there. Lucille also loved Texas Tech athletics. She never missed a woman’s basketball game and enjoyed cheering on the men’s basketball and football teams. Lucille’s life was defined by her faith. She was always involved in bible studies, on church committees, and rarely missed a Sunday service. She was a member of Calvary Baptist Church. In 2018, she became an active resident at Raider Ranch where she enjoyed spending time with friends, playing cards and dominos, and going to Texas Tech Women’s Basketball games. Lucille is survived by her three sons and their wives - David and Lugene Pickering, Jay and Dorothy Pickering, and Don and Cray Pickering, all of Lubbock; Seven grandchildren: Chad Pickering (Andi), Jenea Stone (Caleb), Clay Pickering, Troy Pickering (Morgan), Kaci Pickering, Fallon Pickering, and Britlyn Pickering; and six great grandchildren: Brooks and Blair Pickering (Chad), Palmer and Lucille Stone (Jenea), and Hadley and Tilly Pickering, and a new baby to be born in 2021 (Troy); and two sisters-in-law who were her best of friends, Peggy Pickering Hall and husband, Maurice, and Nancy Burton Toliver; plus her many beloved nephews and nieces. All loved her dearly and will never forget her tenacity, laughter, generosity and undying love for them. Meeting her at the gates of Heaven and preceding her in death are her loving husband of 63 years, Raymond Pickering; her parents, Joseph Luther and Ardonia Toliver; her siblings, Eloise Perrin, Margaret Simmons, Elsie Marion, Joseph Luther Toliver, Jr. and Bailey Toliver; and sister-in-law Millie Pickering Kitchens Berry. Though Lucille did not suffer from the illness, she admired the work of the Alzheimer’s Association of Lubbock. The family ask that all memorial contributions be made to the Association in lieu of flowers. A private family celebration of her life will be held on Tuesday, November 17, 2020.

Lucille Toliver Pickering, 88, passed away peacefully in her sleep at her home on November 13, 2020. She was born on January 29, 1932, in Weinert, Texas, to Joseph Luther and Ardonia Toliver. She graduated from Weinert High School in 1950 and... View Obituary & Service Information

The family of Lucille Toliver Pickering created this Life Tributes page to make it easy to share your memories.

Lucille Toliver Pickering, 88, passed away peacefully in her...

Send flowers to the Pickering family.