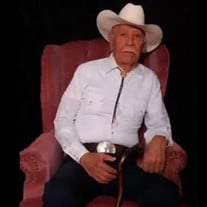 Manuel Gonzales Gaitán, beloved father, went home to the Lord on Sunday, December 6, 2020. Mr. Gaitán was born on June 30, 1922 to Bisente Gaitán and Petra Gonzales Gaitán in Sterling City, Texas. Approaching his 99th year, he often marveled at the unlikely life of a boy born in a small west Texas town. In 1942 at the age of 20, he was drafted into the army and traveled across an ocean he had never seen. At the age of 24, he was a World War II veteran and had served as a medic with the 192ndGeneral Hospital in Cirencester, England. He had been to Paris and Munich too. Following his military service, Mr. Gaitán returned to his native Sterling City. He became a ranch hand and when the season arrived traveled to California to pick grapes and other crops. He also traveled to Colorado, Utah, Idaho, and Montana as he worked with crews of men hired and contracted in west Texas to shear sheep for northern ranchers. Then on October 3, 1953 he married Agustina Leija Montelongo in Sabinas, Coahuila, Mexico. Settling in Sterling City, where Mr. Gaitán had built a house for his bride, the couple became the parents of three children. In 1965, in an effort to find more opportunity for his growing children, Mr. Gaitán moved his family to Lubbock. In Lubbock, he became employed as a carpenter and joined Local Carpenter’s Union #665. In 2018 he happily celebrated 50 years of union membership. Life in Lubbock, Mr. Gaitán remembered, was very good. He was steadily employed, his children found educational opportunities, and the family flourished. Then life surprised him with an unexpected detour. In 1977 he vacationed with his daughter in Los Angeles, CA. She worked at a bank in front of the Universal Studios Lot. Soon, Mr. Gaitán was working as a propmaker for a television series. Thereafter, he was always questioned whether he was ever asked to be in front of the camera. After all, everyone knew he was tall, handsome, and dressed like a Texan: hat, boots, western shirt, bolo tie. After his improbable stint at Universal Studios, Mr. Gaitán returned to Lubbock and resumed working as a carpenter. In 1997, inspired by their need to be near their children and grandchildren, Mr. and Mrs. Gaitán moved to San Antonio. During this time they traveled to Israel and Egypt. It was the culmination of a long held dream to travel to the Holy Land. A few years later, Mr. Gaitán moved to Houston where his beloved spouse of 59 years passed away in 2013. A kind and generous man who loved to reminisce about times past, he never met a person who did not quickly become a friend. Known simply as “Gaitán” to his siblings, nieces, and nephews, Mr. Gaitán was the family patriarch for many years. His children, however, will lovingly remember him as their “favorite Cowboy”. Mr. Gaitán is survived by his sister, Mrs. Albesa Paredes of San Antonio, and by his three children and their families: Elsa and Juan Esquivel with grandsons, Daniel (Jaclyn) and Michael Esquivel all of San Antonio, Elvia Gaitán of Los Angeles, Calif., Eloy Gaitán with grandsons, Marcus, Matthew, Jeremy, and Joshua Gaitán of Houston, and grand-daughter, Victoria (Adrian) Moreno, with great-grandson, Maximus Moreno of El Paso. Mr. Gaitán is preceded in death by his beloved wife, Agustina Leija Gaitán, his parents, and brothers and sisters, Jose Gaitán, Isabel “Chavelita” Gaitán, Ysabel Rodríguez, Senona Lujan, Anita Molina, Pilar Gaitán, and Bicente Gaitán, Jr. Graveside services will be private due to Covid-imposed limitations. A memorial service is to be announced later. The family wishes to extend eternal gratitude to Roxana Melgar for her selfless devotion in caring for their beloved father. She is forever in their hearts and a loved member of the family. The family suggests memorials go to the American Cancer Society, St. Jude’s Children’s Research Hospital, or any charity of choice. In memory of our Father: “Thy memory, my dear father, fills my soul at this solemn hour. It revives in me thoughts of the love and friendliness which thou didst bestow upon me. The thought of these inspires me to a life of virtue; and when my pilgrimage on earth is ended and I shall arrive at the throne of mercy, may I be worthy of thee in the sight of God and man. May our merciful Father reward thee for the faithfulness and kindness thou has ever shown me; may He grant thee eternal peace. Amen.” Hebrew Union Prayer Book

The family of Manuel Gonzales Gaitan created this Life Tributes page to make it easy to share your memories.

Send flowers to the Gaitan family.