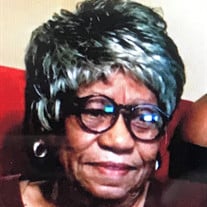 Marjorie Colyne Sherman Thomas was born, June 13, 1928 in Cuney, TX to the parentage of Governor and Ara Sherman who preceded her in death. The family moved to Bullard, TX and then later to Tyler, TX. Marjorie was one of ten children Demosthenes, Brightwell, Tommy, Ledioux, Noble, Berma, Ruby, Bobbie Joyce, and Wiley all of whom preceded her in death. After moving to Tyler, Marjorie attended local schools and joined the Liberty Baptist Church where she was baptized at a young age. After leaving Tyler, she joined the New Hope Missionary Baptist Church, in Lubbock, TX where she remained a faithful member until she transitioned from life on earth to eternal rest. Marjorie, also known as Marge or Aunt Marge by those close to her, graduated from Emmett J. Scott High School in 1946. She graduated from Texas College in 1950 with a degree in Home Economics. While attending Texas College she joined the Alpha Kappa Alpha Sorority, Inc. and on June 13, 1948 married Hammick Thomas. To this union three children were born, Bobby, Jacqueline, and Vincent. Sadly, Jacqueline and Vincent also preceded her in death. Marjorie moved to Lubbock, TX upon graduation from college where received certification and began her teaching career. Her first teaching job was in the segregated Frenship I.S.D. where she taught all subjects, first through twelfth grade. Marge received an M.S. degree in Guidance and Counseling from Texas Tech University. She retired from the Lubbock I.S.D. after 38 years in education. Marge held membership to several organizations. She was a charter member, former Basileus and a Golden Soror of the Alpha Kappa Alpha Sorority, Meals on Wheels, AARP, and the American Legion Auxiliary. Mourning her passing is her son Bobby Thomas, Lubbock, TX, son in law James Lenord, Houston, TX, granddaughter, Jocelyn Fall (Christopher), Houston, TX, great-grandson, Christopher Fall, Jr. Houston, TX, goddaughter, Sharon Bunton, McKinney, TX, several nieces, nephews, and a host of other relatives and friends.

Marjorie Colyne Sherman Thomas was born, June 13, 1928 in Cuney, TX to the parentage of Governor and Ara Sherman who preceded her in death. The family moved to Bullard, TX and then later to Tyler, TX. Marjorie was one of ten children Demosthenes,... View Obituary & Service Information

The family of Marjorie S. Thomas created this Life Tributes page to make it easy to share your memories.

Send flowers to the Thomas family.