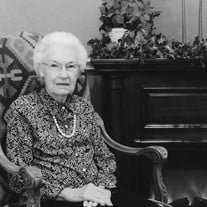 Devoted wife, mother, daughter, sister, and friend, Martha Lee Norman Amick was a lifelong learner and committed follower of the Lord Jesus Christ. She was a woman of strong faith and deep prayer who delighted in serving others. A wonderful cook, Martha loved entertaining and encouraging family, friends, and those in need with gifts of delicious food including her homemade oatmeal bread. Born on June 1, 1924 in Greenville, TX, to Hazel and Lee Norman, Martha entered heaven on August 24, 2020, of natural causes in Lubbock, TX. Her childhood home on the family farm was a happy place of love, laughter, and music, along with hard work, where their small, close-knit family learned lessons about faith, family, and strong moral values. After high school graduation, Martha attended North Texas State Teachers College (now North Texas State University) during World War II, earning a teaching degree and certification in home economics. She would later earn a master’s degree in education and a certification in special education. Martha taught school in Trenton and Pilot Point and then moved to the Texas Panhandle where her Dad leased and later purchased additional farmland in Dimmit. She taught home economics there before moving to Plainview and marrying Vernon Jones Wright, Junior, in 1952. Sadly, Vernon became ill from polycystic kidney disease and died in 1958. On December 29, 1959 she married Robert Louis Amick until his death on July 6, 1999. She often said she was grateful to have been blessed with two happy marriages. A two-time cancer survivor, Martha became interested in healthy eating and natural healing strategies long before their popularity today. She and Louis loved working outdoors and created and tended beautiful flower and vegetable gardens for many years. When a happy or difficult situation occurred for friends or family, Martha was often the first one to arrive with a meal and her quiet, loving presence. She and Louis were very devoted to their church and held many leadership positions. Martha taught the eldest women of the church for many years and loved nurturing and encouraging them. Martha also had a beautiful singing voice. Nothing delighted her and her sister and two brothers more than singing four-part harmony when they were together. She also played piano by ear. Her grandchildren loved the fact that in the last few years when her memory was failing, she could clearly remember songs - and could still sing and play them on the piano. She could also quote Bible verses that she had “hidden in her heart.” Along with her husbands and parents, Martha is predeceased by her sister Rachel Elizabeth Davenport, a precious aunt and uncle, Kubah and Bill Gandy, and her son-in-law, Steve Kent. She is survived by her brothers John Thomas Norman (Joan) and Clyde Taylor Norman (Helen). She is also survived by two daughters Wynette Kent and Meredith Harrison (Brent); five grandchildren-Layne Kent Rotramel (Erik), Caroline Kent, Bren Harrison, Jacob Harrison, and Nick Harrison; five great-grandchildren, Gideon, Ethan, Selah, Rebekah and Leora Rotramel, and a host of beloved nieces, nephews, great nieces and nephews and great-great nieces and nephews on all sides of her family. The family is greatly appreciative of the love and support you have shown now and throughout Martha’s life. A private family burial service will be held in Plainview on Saturday, August 29. Memorials may be made to First Baptist Church in Plainview. A video of the service and a longer visual memorial will be posted at sandersfuneralhome.com.

Devoted wife, mother, daughter, sister, and friend, Martha Lee Norman Amick was a lifelong learner and committed follower of the Lord Jesus Christ. She was a woman of strong faith and deep prayer who delighted in serving others. A wonderful... View Obituary & Service Information

The family of Martha L. Amick created this Life Tributes page to make it easy to share your memories.

Send flowers to the Amick family.