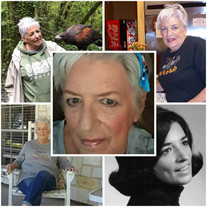 Mary Lucretia “Trish” Ashley Steck passed away peacefully on August 27, 2020 at the age of “21”. Trish was born October 1, 1949 in Graham, TX to Alonzo Howard “Pete” and Mary Lena Ashley Robertson. She graduated in 1968 from Graham High School then attended San Angelo State. Trish made many friends while working for Lubbock Independent School District. She wore many different hats and made several friends in her various activities. She was known to always have a camera in her hand to capture her precious moments. Trish is lovingly remembered by her children Brad and Staci Steck, of Lubbock and Karen and Jason Gilson of Midlothian. Boomba’s precious grandchildren, Halie and Joey Pierce, Madison and Matthew Beauregard, Matthew Steck, Ashley Gilson and Riley Gilson. Boomba’s great granddaughter, her partner in crime, Kinsley “Sassy”. Her loving sister Debbie and Steve Lapp, of New York, and their children, Jeff and Sue Lapp, Mike and Amy Lapp and their children Lexi and Audrey, Nate and Jody Lapp, Rachel Lucretia and Mike Neilson and their children Kayla and Zack. Trish will be deeply missed by her Forever Friends Lynette Gomillion, Charlie Norman, Marcia Shook and Debbie Lapp. Trish is preceded in death by her son Tod Howard Steck, who greeted her at Heaven’s gate with a smile and a hug. She is reunited with her stepfather John Robertson Sr and her two brothers William Jerry Ashley and George Howard Ashley. Trish also joins her first husband, Walter Lowe, who died in the Vietnam War. A special thank you to everyone who has been in prayer for the families. Trish lived a life full of joy with a song in her heart that you would frequently hear through her humming. The family will not be having a memorial service at this time. Trish would like everyone to hug their families and have a margarita in her memory. Memorials are suggested to Lubbock Memorial Arboretum at PO Box 93446 Lubbock, Texas 79413. “Remember me with smiles and laughter for that’s how I’ll remember all of you. If you can only remember me with tears, then don’t remember me at all.”

The family of Mary Ashley Steck created this Life Tributes page to make it easy to share your memories.

Send flowers to the Steck family.