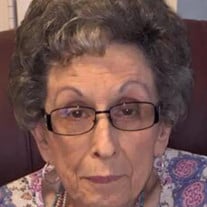 Naomi Inez Johnston passed peacefully from this world on September 14, 2021. She was blessed with a full and long life of 94 years. A celebration of her life will be at 10:00 AM Monday, September 20, 2021, at Southcrest Baptist Church in Lubbock, with Dr. Jerry Newman officiating. Graveside services will follow at the Lockney Cemetery at 2:00 PM. Naomi was born December 21, 1926 in Floyd County to Alf and Myrtle Huckabee, the third of seven children. She lived most of her early life in the Liberty and South Plains communities of Floyd County. She was a 1945 graduate of Floydada High School. She married G.B. Johnston, Jr. of Lockney on March 11, 1950 in Clovis, New Mexico. This marriage produced four children; Barry, Kay, Chris, and Lori. For the first 20 years of their marriage, Naomi was a devoted homemaker. With all the kids in school she became a teacher's aide at Lockney Elementary. From there she later became a school librarian, and spent over half of her 23 year career with Lockney ISD as the Elementary school librarian. It was during this time that she made many life long friends from the teachers she came to know and the many students that she helped and served in her roll as librarian. Naomi is survived by her children, Barry Johnston and wife Jana, Chris Johnston and his wife Michele, and Lorie Bean and husband Kyle. She is also survived by 12 grandchildren, 21 great grandchildren, and 6 great great grandchildren. She was preceded in death by her husband G.B. Johnston, Jr., daughter Kay Martin, grandson Michael Martin, and great granddaughter Charli Jones. Her service will be conducted by Sanders Funeral Home of Lubbock. She can be viewed at Sanders Funeral Home. The family request that in lieu of flowers that memorials be given to The Alzheimer's Association, 4601 50th Street, Suite 216, Lubbock, Texas 79414 or to your favorite charity.

Naomi Inez Johnston passed peacefully from this world on September 14, 2021. She was blessed with a full and long life of 94 years. A celebration of her life will be at 10:00 AM Monday, September 20, 2021, at Southcrest Baptist Church in Lubbock,... View Obituary & Service Information

The family of Naomi Inez Johnston created this Life Tributes page to make it easy to share your memories.

Naomi Inez Johnston passed peacefully from this world on September...

Send flowers to the Johnston family.