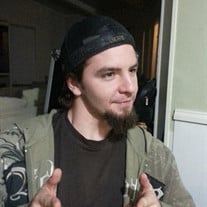 A celebration of the life of Nathan Bloedel, 26, of Lubbock, Texas will be at 1:00 p.m., Thursday, December 17, 2020 in Sanders Memorial Chapel located at 1420 Main Street. Nathan spent the majority of his life in Texas. He was born in Houston, where he was raised by his mother and grandmother for the first 3 years of his life. He moved to Lubbock with his mother in 1997. Nathan knew Lubbock as home for the majority of the rest of his life. He graduated from Frenship High School in 2013 and went on to study at Sam Houston State University that fall. As of recently, he was attending South Plains College for engineering, and he worked as an electrician at Temple Electric. Nathan had a huge determination to reach his goals, right his wrongs, and to make the world something worth living in. Nathan was born with a condition called cerebral palsy. This was only one of his struggles, but this by no means slowed him down in his dreams and desires for his life. His coworker claimed that even with his limitations, he performed better than most of those with no physical disabilities. His family says he was resilient as a child and never thought of himself as different from anyone else because of his disability. His struggles made him into the strong and resilient man he came to be. Nathan always had a positive outlook about his situation and never let anyone see this as something that held him back. When Nathan was little, he acquired a passion for music. So much so that he got his first guitar, and taught himself to play it at a very young age. He wrote beautiful songs not only about the struggles he faced, or the girls that broke his heart in high school, but the things he loved in life. He wrote poems, that he turned into songs and he performed on stages to show the world how vulnerability can create art. Nathan even performed the national anthem at a school event in high school on his electric guitar. He created the Frenship Guitar Club at school for after school hours where he taught students how to play, but mostly as a safe environment for those that needed somewhere to go. The people that went didn’t always learn to play guitar, but found it as a safe place where it was impossible to feel anything but optimism because of the environment Nathan provided with the club, and the positivity he radiated on a daily basis. Nathan loved the beautiful things in life, even if he had to make it himself, through the art of his music, poetry and drawings. Nathan also had a passion for academics. He won competitions for robotics and mathematics in high school. He took a basics class in Latin which turned into him teaching himself the language and also taught himself to speak German. He spent time learning how to woodwork, and build things, as well as learning his way around car mechanics. He always wanted to do things out of the box, and he did that. To the people that knew Nathan, to call him a good man is an understatement. Nathan cared deeply about his family and friends and would give the shirt off of his back. He was generous and kind, but also stood up for his beliefs and made sure the people in his life were taken care of. He loved his mother, his siblings, and his friends and would do anything for them. He was thought of so highly by everyone that knew him. Nathan also had the best sense of humor, he was the life of the party. He could make anyone laugh. Nathan had a beautiful pit bull, Bonnie, who he loved dearly. He raised her from a puppy and he loved walking with her and playing with her in the yard. Nathan enjoyed spending time with family and friends. He was constantly surrounded by those who loved him and would always call to check on people, and see when they could catch up next. He enjoyed playing video games, playing music, or even just talking on the front porch. Nathan will be dearly missed by so many people but will watch over his family and friends and live in our hearts forever. Nathan is preceded in death by his grandmother, Minnie Howell; His step father, Jerry Garcia. Nathan is survived by Mother, Christina Warren and Step father, Jason Warren; Father, Shannon Hinkle; Sister, Amber Bloedel and brother in law Kristopher Gaona; Brother, Gabriel Garcia; Sister, Chante Garcia; Sister, Andrea Garcia; Aunt, Wendy Blanks and many other close family and friends.

A celebration of the life of Nathan Bloedel, 26, of Lubbock, Texas will be at 1:00 p.m., Thursday, December 17, 2020 in Sanders Memorial Chapel located at 1420 Main Street. Nathan spent the majority of his life in Texas. He was born in Houston,... View Obituary & Service Information

The family of Nathaniel L Bloedel created this Life Tributes page to make it easy to share your memories.

A celebration of the life of Nathan Bloedel, 26, of Lubbock,...

Send flowers to the Bloedel family.