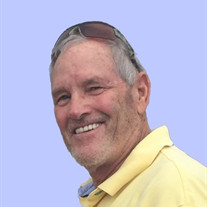 Olan Kenney Moore (March 26, 1947-February 17, 2021) was born at St. Mary’s Hospital in Lubbock, TX to Yeator Lavar Moore and Leta Louise Kenney Moore Thomason. He was named after the physician who delivered him, Dr. Olan Keys.  Visitation will be at Sanders Funeral Home from 5:00-6:30 p.m., Monday, February 22, 2021 with services held at 1:00 p.m., Tuesday, February 23, 2021 at Turning Point Community Church 11202 Quaker Avenue. Burial will be at Lubbock Cemetery. Olan’s father was struck by lightning when Olan was three years old.  Later his mother married D.C. Thomason of Wellington, TX. Olan graduated from Wellington High School and obtained a Master of Science degree in Entomology from Texas Tech University.  Olan married Leslie Covey in 1969. He worked as an entomologist for the county extension agent’s office in Castro County then went into business for himself working with farmers in that area. Olan and his family moved back to Lubbock in 1990 but he continued to work with the farmers in Castro County.  Olan also taught school in Nazareth, TX and at Lubbock Christian University. He later married Jingbo Moore on August 08, 2008. Olan and Jingbo enjoyed traveling to China, working in the garden together and operating their business. Olan lived life to the fullest, was an avid outdoorsman, and loved to fly his plane.  He was devoted to his family and friends and always looking out for everyone else.  He had a love for tinkering in the shop with his grandsons and cooking his grand meals for the family. Olan was preceded in death by his parents:  Lavar Moore, Louise Thomason, stepfather D.C. Thomason, brother Ron Thomason, and brothers-in-law Lynn Wolf and Larry Pipins. Olan is survived by his wife Jingbo, daughters: Heather Martinez (Freddy), Gretchen Judah (Allan) and Allison Fannin (Kyle) and stepson Hao Fan. Also surviving are eight grandchildren: Bryce Martinez, Bailey Martinez, Zach Judah, Courtlyn Judah, Eli Judah, Skylar Fannin, Kolby Fannin, and Cambelle Fannin. Other survivors are sisters: Laverne Wilson (Frank), Linda Wolf, Cathy Pipins and sister-in-law Anne Thomason and many nieces and nephews. Memorials can be made to the Wounded Warrior Project @www.support.woundedwarriorproject.org.

The family of Olan Kenney Moore created this Life Tributes page to make it easy to share your memories.

Send flowers to the Moore family.