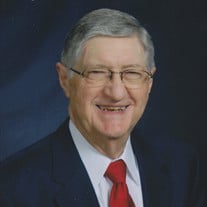 O. C. Madden, Jr. 86, formerly of Lubbock, went to be with his Lord and Savior on August 29, 2021 in Tyler Tx. O. C. was born on October 21, 1934 in Hamlin, Texas to Othal C., Sr. and Ann Robert Madden. His family moved to Lubbock when he was a baby. He was a lifelong member of First Baptist Church, Lubbock, having been enrolled in the Cradle Roll as an infant. He graduated from Lubbock High School in 1953 and enrolled in Texas Tech to study Accounting. During his 3rd semester at Tech, he was drafted into the U. S. Army. He was sent off to Ft. Benning for Basic Training and was then deployed in the 8th Infantry Division in Fort Carson, Colorado. He was later transferred to a post in Jacksonville, Florida, where he served as a clerk in an executive officer's command station. Because of his excellent professionalism and impeccable attention to detail and protocol, he was selected to be the dedicated driver and attendant to President Dwight Eisenhower when he was on station. He was profoundly proud and honored by this and his many commendations during his service time. Upon his honorable discharge from the U.S. Army, O. C. returned to Texas Tech to continue his studies and he obtained his Bachelor of Science Degree in Accounting in January 1959. He passed his CPA certification and was a tremendous CPA; he held membership in Texas, New Mexico, and Lubbock's professional organizations for over 50 years. He married the love of his life, Shirley Bellar, on May 22, 1959 at the Chapel of the First Baptist Church Lubbock. They had 3 children, O. C. Madden III, K'Lin Madden Noble, and Charles Alan Madden. The family attended and was active at FBC Lubbock, where O. C. served as a deacon, deacon chair, 4th grade Sunday School Teacher, and many other areas of church life. His dedication to integrity and his personal and professional ethics was noted and appreciated not only by his clients, but also by Baptist organizations around the state of Texas. He served in many capacities with the Baptist General Convention of Texas, the Baptist Executive Committee, The BGTC Finance Committee, and Texas Baptist Men for over 22 years. His knowledge and expertise were counted as invaluable in every ministry and office that he served. He was a loving son, brother, husband, father and grandfather to his family. He was his grandson's Texas Tech and US Army hero, and he was so proud of the men they are becoming. He and Shirley moved to Tyler, Texas in January 2021. He blessed his family with Holy Spirit-filled prayers, most stirringly in the months before his passing. Loved ones left to live his legacy include his wife of over 62 years, Shirley Bellar Madden, son O. C. III and his wife Lara and her children Isaiah, Aria, and Alaiah; daughter K'Lin Noble, her husband Jeff and their sons Parker and Tyson, and his wife Christine; brother Robert Madden, his wife Rita; sisters-in-law Margie Imboden and her husband Jim, and Linda Jensen and her husband Sumner; and many nieces and nephews, great nieces and great nephews. He was preceded in death by his father, Othal C, his mother Ann, and his son Charles. Services will be Friday, September 3, 2021 at 11am at FBC Lubbock. Graveside for family will be at 10am Friday at the City of Lubbock Cemetery. Due to an abundance of caution, there will not be a dedicated visitation time.

The family of Othal "O.C." Madden, Jr. created this Life Tributes page to make it easy to share your memories.

Send flowers to the Madden family.