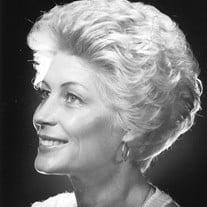 Pat Parker of Lubbock passed away on August 7, 2020 at home after an extended illness. Her services will be at 10:00 a.m., Tuesday, August 11, 2020 at Sander’s Funeral Home Chapel with burial following in Anton Cemetery next to her parents. She was born Patsey Rose Parker on September 6, 1941 in Weslaco, Texas to Monroe and Floy (Shepperd) Parker although throughout the years she was called Patti and later Pat. Her family moved to Anton in 1949 where she attended school. In 1958 she married Sherrill Zoch and they had three daughters Tonya, Rhonda, and Sandra. They moved to Fort Worth in 1965 where she began her work with hair by styling wigs and managing wig salons. Pat returned to Lubbock after their divorce. She received her training for hair dressing at Fort Worth School of Beauty and finished at Isabel Powell Beauty School in Lubbock where she became licensed to dress hair. She also completed the course work to become an instructor but did not pursue that field ending up fixing people’s hair from 1970 until her retirement in 2013. During this time many of her clients also became her friends. Additionally she model clothes and won hair shows with Wanda Edward’s styling in Fort Worth and modeled for hair advertising in Lubbock where she owned her own salon at one time. She is survived by her three daughters: Tonya Hettler and her husband Alan, Rhonda Tate, and Sandra Zoch; 7 grandchildren: Rachel, Amanda, Dustin, Rhody, Paxton, Christopher and Garrett; 11 great grandchildren; and one great-great grandson. She is also survived by two brothers and their wives: Carlton & Jane Parker and Mac & Lynda Parker; one sister-in-law, Charlsie Parker along with a niece and 5 nephews. She was preceded in death by her parents Monroe & Floy and two brothers, James and Tim Parker. Visitation will be 7:00 – 8:30 p.m., Monday at Sanders Funeral Home, 1420 Main St, Lubbock, Texas. In lieu of flowers, memorials may be made to Legacy of Love Hospice, 4409 71st Street, Lubbock, TX 79424.

Pat Parker of Lubbock passed away on August 7, 2020 at home after an extended illness. Her services will be at 10:00 a.m., Tuesday, August 11, 2020 at Sander&#8217;s Funeral Home Chapel with burial following in Anton Cemetery next to her parents. She... View Obituary & Service Information

The family of Patsey Rose Parker created this Life Tributes page to make it easy to share your memories.

Send flowers to the Parker family.