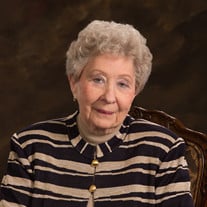 Patsy "Pat" Koontz Renfro was born in Stratford, TX to Eccle Ludlow and Cecile Koontz on December 9, 1934. She passed away on December 28, 2021. In 1960, she married Robert "Bob" Renfro. They were married 56 years before his death in 2017. She graduated from West Texas State University and later earned two masters degrees. She began teaching at Lubbock High School in 1959. She taught in Guthrie, Hereford, and Seagraves before retiring as the 4-County Special Education Co-op Supervisor in Brownfield. As a fun part-time job, and after retiring from education, Pat worked as a travel agent for Envoyѐ Travel. Bob and Pat enjoyed traveling the world, visiting every continent except Antarctica. Nothing made them happier than when their grandchildren began traveling with them. She will be remembered as a loving wife, amazing mother, wonderful grandmother, beloved sister, competitive bridge player, loyal friend, and a devoted member of First Christian Church of Lubbock. Her last act of servanthood was knitting 454 hats as Christmas gifts for the students of Lubbock ISD Bean Elementary. She is survived by her daughters Lyn Jackson and Samantha Wright, a son-in-law, Kerry Wright, three grandchildren, Michaela Wright, Hannah Jackson, and Ethan Wright, all from Lubbock, a sister, Peggy Bosley, a brother, T.J. Koontz and a sister-in-law, Cherie Koontz, all from Amarillo, along with many nieces and nephews. Visitation will be held on January 4th at Sanders Funeral Home in Lubbock, from 5:00-7:00 pm. Memorial Service will be held on January 6th at First Christian Church in Lubbock, at 2:00 pm. In lieu of flowers, the family recommends memorials to the First Christian Church of Lubbock or to the Robert and Patsy Renfro Memorial Scholarship at Texas Tech. http://www.give.ttu.edu/Renfro

The family of Patsy Ruth Renfro created this Life Tributes page to make it easy to share your memories.

Send flowers to the Renfro family.