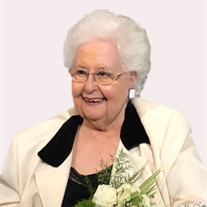 Phyllis June Owens Fanning passed away on Saturday, September 11, 2021. Phyllis found her way home, peacefully in her sleep. In her life, she was a great wife, musician, seamstress, cook, artist, and mother. Visitation will be Tuesday, September... View Obituary & Service Information

The family of Phyllis June Owens Fanning created this Life Tributes page to make it easy to share your memories.

Send flowers to the Fanning family.