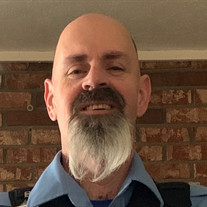 Randal Mark Stevenson, 53, of Lubbock, TX passed away on August 27, 2021. Randy was born on October 31, 1967 in El Dorado, Arkansas. He graduated from John L McClellan High School in Little Rock, AR. He received a Bachelor's Degree in Sport's Medicine/ Athletic Training from North Louisiana University in Monroe, LA. After graduation, he moved to El Paso where he was an Athletic Trainer at Bowie High School. Following that, he became a Police Officer with the El Paso Police Department. Throughout his time there, he was member of the Anti-Gang Unit, a union representative for the force and a Motor Officer with the motorcycle division. He took a medical retirement from the department and attended the San Diego Golf Academy and became a Certified Golf Instructor. He, his wife and stepdaughter moved to Lubbock where he was the Director of Instruction for Golf-tech. After its close, Randy moved back into the positions that he loved the most and became a Level-III security guard. He worked with a few companies, but found his home and closest friends with Monarch Executive Protection Services. Randy met his wife, Connie in El Paso, TX. They were together for 21 years and they were married in 2012. Together they raised Victoria Michelle, Connie's daughter. They loved each other very much and lived in happiness here in Lubbock. He leaves behind his wife, Connie, step-daughter, Victoria Michelle, and three fur babies, Boots McGee, Mya Belle, and Luna Bear. Randy was preceded in death by his father, Fred S. Stevenson and is survived by his mother Ginger Stevenson of Rogers, Arkansas. Randy was also a loving brother to Kara Gill and brother-in-law to Brian. Randy was also a nephew, cousin, uncle, and great uncle. Randy will also be dearly missed by his in laws, Robert and Vangie Holt. Randy was a big part of their family and was always present for family events, celebrations, and vacations. Randy has always been described as one of a kind. He was quick witted and loved to discuss politics with anyone that would listen. He spent his free time creating beautiful wood works in his wood shop or watching his favorite TV shows with his wife. He had a sarcastic sense of humor that made everyone laugh. He was often quoted as saying that if someone didn't like what he said or did it was ok because he carried mistletoe in his back pocket. Randy will be dearly missed by all. We love you Randy!!!

The family of Randal Mark Stevenson created this Life Tributes page to make it easy to share your memories.

Randal Mark Stevenson, 53, of Lubbock, TX passed away on August...

Send flowers to the Stevenson family.