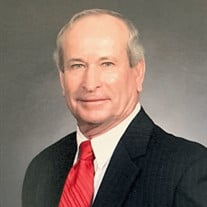 Ray Gant, 76, went to be with his Lord and Savior on January 27, 2021. Ray was born in Clifton, Texas on February 24, 1944, as the second son to Newt and Sudie Gant. They, with his older brother, Fred, lived on a farm that is now at the bottom of Lake Whitney. Fred and Ray attended a one room schoolhouse in Peoria, Texas until that closed, and they then attended school in Hillsboro, Texas. Their family grew with the birth of another boy, Roy. When Ray was in 7th grade in 1957, the family purchased and moved to a farm in Aiken, Texas. He attended Lockney High School, and later farmed some rental land south of Aiken. Ray met the love of his life, Lynda Kay Wylie, on a blind date. His cousin and her best friend from high school, Theresa, set them up. After dating a little more than a year, they were married on June 5, 1965 in Lubbock, Texas. Ray farmed Lynda’s dad’s farm and welcomed their son, Trent, in 1968. Ray had always dreamed of living in the Northwest. So, in 1970 they moved to Washington State. Ray managed an apple orchard until a shoulder injury brought them back to Texas in 1972. He worked for Case IH in Lubbock and then moved to Olton to manage a large farm. Their daughter, Tandi, was born in 1973, and they moved back to Lubbock, where Ray worked for Case IH again. In 1975, his family approached him to move to Aiken and farm with his dad who was looking forward to retiring before too long. Ray and Lynda worked together with his mom and dad for several years before his dad sold his farm to Ray. They raised Trent and Tandi on the farm working together as a family. They attended and were members of First Baptist Church, Lockney, where he was an usher. He was also a director on the Lockney Coop Board. Ray and Lynda sold the farm, retired, and moved to Amarillo, Texas in 2009. After attending several churches and meeting many new friends, they became members of South Georgia Baptist Church. Ray worked hard and never complained. His fields were the most pristine in Floyd County, and he took pride in that. He taught his children the value of a relationship with Christ, hard work, dedication, honesty, and loyalty. He loved Lynda and his family with everything he had. He never missed an opportunity to see his children or grandchildren play a game or compete. He cherished his time with his family and loved to travel, especially to the Northwest. He was also a faithful friend and neighbor. He was always willing to lend a hand. His favorite times were spent laughing, telling stories, and spending time with them. Ray is survived by his wife, Lynda Gant; son Trent Gant and wife Christy of Wolfforth, Texas; daughter Tandi Mitchell and husband Matt Mitchell of Dripping Springs, Texas. Granddaughter Camberly Alvarado and husband Danny. Grandsons Brody Gant, Daniel Mitchell, Nathan Mitchell, and Luke Mitchell. Brothers Fred Gant and wife Judy, Roy Gant and wife Jean. Many dear aunts, uncles, cousins, nieces and nephews, and a host of friends. He is preceded in death by his parents Newt and Sudie Gant, mother in-law and father-in-law, Raymond and Valerie Wylie. These and other cherished loved ones will be awaiting him at Heaven’s gate, and for this, we are thankful. Visitation for Ray will be Friday, January 29, 2021 from 6:30PM to 8:00PM. Funeral service will be held at Sanders Memorial Chapel on Saturday, January 30, 2021 at 3:00PM. Pallbearers for the funeral service will be, Daniel Mitchell, Nathan Mitchell, Luke Mitchell, Brody Gant, Danny Alvarado and Ray Mercado. Graveside service will be held at Resthaven Memorial Park on February 4, 2021 at 11:30AM. Pallbears for the graveside service will be, Michael Reams, Paul Turner, Rocky Buckner, Danny Buckner James Race and Ray Mercado. The family would like to thank the kind staff at The Amarillo BeeHive and Open Heart Hospice for their loving care. Memorials can be sent to: Amarillo BeeHive 5804 54th St. Amarillo, Texas 79109.

Ray Gant, 76, went to be with his Lord and Savior on January 27, 2021. Ray was born in Clifton, Texas on February 24, 1944, as the second son to Newt and Sudie Gant. They, with his older brother, Fred, lived on a farm that is now at the bottom... View Obituary & Service Information

The family of Ray Gant created this Life Tributes page to make it easy to share your memories.

Send flowers to the Gant family.