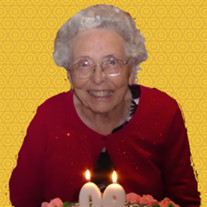 Jeanette Hamilton Meinecke of Lubbock, Texas passed away January 6, 2021. Born October 22, 1928 in Sweetwater to parents Robert Ray Hamilton and Aura May Grissom Hamilton, she grew up helping take care of sisters Georgia Joyce and Patsy Ann, and brother Billy Bob. Jeanette and her siblings spent their early years on the family farm near Blackwell, Texas and then moved to her maternal grandparents’ farm north of Lubbock in 1939. Jeanette attended elementary school in New Deal where her mother was a teacher. After graduating from Lubbock High School in 1946, Jeanette continued her studies at Texas Tech. She was an excellent student and proud member of the Honor Society, earning a B.S. in Sociology in 1949. Jeanette married the love of her life Steve Benton Meinecke in 1948 and was a loving mother to their 4 children. They were devoted partners for more than 72 years. Throughout her life Jeanette was a volunteer in schools, church and community. Jeanette and Steve were active members of First Methodist Church where they were early members of the Home Builders class. She taught Sunday School classes for many years. She was active in PTA, Cub Scouts and Campfire Girls. She volunteered with Friends of the Library for over twenty years and was an election judge for many years. Jeanette enjoyed reading, baking and sewing. For more than 80 years Jeanette loved preparing food for her family and friends. Over the years she helped her husband Steve at Meinecke Bros Hardware. Jeanette had a phenomenal memory for names, dates and events. She loved to tell stories of her early life. There was never a birthday or anniversary that she forgot. She and Steve had many lifelong friends and were always ready to make new ones. They loved and embraced their large extended family of cousins, nieces, nephews, and half-brother and half-sisters. Jeanette is survived by her by her half-sister Linda Hamilton Dinnogen of Santa Barbara, California; children and spouses: Robert and Nancy Meinecke of Lubbock, Texas; Yvonne Saffer of Littleton, Colorado; Jon and Donna Meinecke of Denton, Texas; Lesa and Paul Hipes of Westmont, Illinois; eight grandchildren and five great grandchildren. Jeanette is preceded in death by her loving husband, Steve and their beloved son, Larry Meinecke. Jeanette was kind, generous and ever ready to listen and help. She will be remembered always and sorely missed. Graveside services will be held at 3:00 p.m., Tuesday, January 12, 2021 at the City of Lubbock Cemetery.

The family of Jeanette Meinecke created this Life Tributes page to make it easy to share your memories.

Send flowers to the Meinecke family.