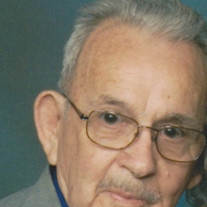 Lubbock – Raymond Ralph Watkins passed away from this world to the arms of his loving Savior on February 26, 2020, at the age of 94. Services will be at Sanders Funeral Home on Saturday, February 29, 2020, at 10:00 AM. Interment will be at Peaceful Gardens Cemetery. The family will receive friends on Friday evening from 6:30-8:00 p.m. at the funeral home. Raymond was born on June 12, 1925 in Seminole, Oklahoma to John & Ida Watkins. He served in the Army during WWII, earning several medals. After being Honorably discharged in 1946. He met and married the love of his life, Fawn Olean Garrett. Together they raised 3 children, Glen, Marlin, and Sheila. Their marriage was strong and lasted for 66 years. He provided for his family by being a mechanic, a welder, and a trucker. He was best known though as being a loving Father and Papaw. Raymond is preceded in death by his wife Olean; parents, (John and Idabell); four brothers, Rex (Phoenix), Orval (Waller, TX), Russell (Lubbock) & Gerald (Mulberry, Ark); one sister Shirley Moeller (Weinert, TX); sisters-in-law Rosie and Betty. Left behind are his three children, Glen Watkins (Barbara) of Kilgore, TX; Marlin (Gail) Watkins of Tatum, TX; Sheila (Sam) Melton of Kilgore, TX.; brother, John Watkins of Phoenix, AZ; a sister Syble of Vidor, TX.; eleven grandchildren; fifteen great-grandchildren; three step-grandchildren; twelve step-great-grandchildren; and three great-great-grandchildren.

The family of Raymond Ralph Watkins created this Life Tributes page to make it easy to share your memories.

Lubbock – Raymond Ralph Watkins passed away from this world to...

Send flowers to the Watkins family.