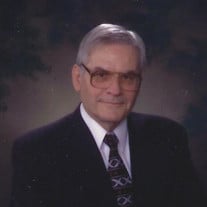 Rex David Saffle was born on June 18, 1932 to Edgar Floyd (Dink) Saffle and Winnie Mae Saffle in Caps, Texas. He passed from this life on August 15, 2020. Rex and his family moved to Petersburg, Texas in 1936 where he graduated from high school in 1949. He received his BBA in Accounting in 1953 from Texas Tech University. While at Texas Tech, Rex was a member of the Saddle Tramps and Phi Mu Alpha Sinfonia Fraternity, and he has remained a member of the Texas Tech Alumni Association since 1953. Rex served his country in the United States Army from April 1954 to April 1956. He began his accounting career in 1956 and in 1972 he formed his own CPA firm which became Saffle, Sawall & Company. Rex was a leader in professional CPA organizations. He was appointed to State Legislative Committees and served in leadership roles at the state and national levels. He was appointed to the Audit Advisory Committee for the Texas State Treasurer and was a member of the Texas Tech Accounting Advisory Committee. Rex served on the Lubbock Board of Tax Equalization. He was a Jaycees and a Paul Harris fellow member of the Greater Lubbock Rotary Club. Rex was a lifelong Republican and served several years as county treasurer and as campaign treasurer for various candidates. Rex was a charter member of Second Baptist Church, where he served as a Deacon, member of the audit committee, treasurer of the Sick Children’s Clinic and Choir member for over 60 years. Rex sang in the Lubbock Civic Chorale for over 25 years and was an active member of the board of directors. Rex led by his faithfulness, honesty and good deeds. His friends and colleagues thought of him as representing the highest integrity in all areas of his professional and personal life. Rex married Doris Crabtree Saffle on June 26, 1953, she preceded him in death on February 22, 2002. Rex was preceded in death by two brothers, Buddy Saffle and Joe Saffle and his daughter, Beverly Saffle. His survivors include his son, Doug Saffle and wife Sherry, his grandchildren, Kristy Ramirez and husband Abel, Sarah Fuentes and husband Tony, George DeLaCruz and wife Stephanie, 10 great-grandchildren, two great-great-grandchildren, all of Lubbock and sister, Shirley Lester of Houston. Graveside services will be held at Resthaven Cemetery at 10:00 AM on Friday, August 21, 2020. This service is open to friends of Rex Saffle, masks and distancing will be required. In lieu of flowers, the family requests memorials be made to Second Baptist Church Music, 6109 Chicago Ave, Lubbock 79424 or Lubbock Civic Choral, 5815 82nd #145, Lubbock, 79424. Online condolences may be offered at sandersfuneralhome.com.

Rex David Saffle was born on June 18, 1932 to Edgar Floyd (Dink) Saffle and Winnie Mae Saffle in Caps, Texas. He passed from this life on August 15, 2020. Rex and his family moved to Petersburg, Texas in 1936 where he graduated from high... View Obituary & Service Information

The family of Rex David Saffle created this Life Tributes page to make it easy to share your memories.

Send flowers to the Saffle family.