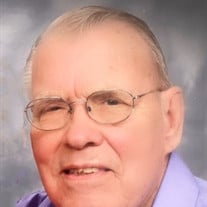 Richard James Kohnle, 87 died November 26, 2021 in Lubbock, Texas. Richard James was born on February 23, 1934 to Helen and Wilbur Benjamin Kohnle, Sr. in El Paso, Texas. Richard was raised in El Paso, graduating from El Paso High School in 1952 and earning his bachelor's degree from Texas Western University (now UTEP). Afterwards, he served in Korea as an officer in the US Army, field artillery division. He attended a few classes at Texas Western upon his return from Korea where he met and fell in love with Mary Ann Marcum. They married on December 26, 1959 in El Paso. Richard was a purchasing agent with Southwestern Portland Cement and was transferred to Amarillo in the early 1960s. There they welcomed their three children: Karen, Ben and Joe. Richard was very active in coaching girls track, boys baseball and football through their elementary school years mostly through Kids, Incorporated. He would later go to work for Cominco in Borger, but still lived in Amarillo and didn't mind the daily commute. Richard was active in the Purchasing Agents Association and the Knights of Columbus. They were members of St. Mary's Catholic Church in Amarillo for several decades and most recently, he and Mary Ann were members of St. Hyacinths in Amarillo. Mary Ann proceeded Richard in death on January 27, 2016. In fall 2017, Richard moved to an assisted living facility in Lubbock, Texas to be near Joe and his family. Richard was preceded in death by his wife Mary Ann, his twin sister Martha Jane Kuper and his younger brother, Wilbur Benjamin Kohnle, Jr. He is survived by his three children: Karen (Steve Meek) of Spokane, Washington; Ben (Debbie) of Northlake, Texas and Joe (Katrina) of Lubbock, Texas. By his grandchildren: Trevor (Tahney) Meek of Colbert, Washington, Kasi (Andrew) Kennedy of Burbank, California, Ethan Kohnle of North Bergen, New Jersey, and Jordan (Corey) Wallace, Jared, Austin, Chas, Madison, Drew and Addison Kohnle of Texas. By his four great grandchildren: Reagan and Elliott Meek of Washington and Dylan and Luke of Texas. Mass will be on December 11, 2021 at 11 am at Holy Spirit Catholic Church, 9821 Frankford Avenue, Lubbock, Texas. In lieu of flowers, please consider giving to Kids, Incorporated of Amarillo at 2201 SE 27th Avenue, Amarillo, TX 79103. https://www.kidsinc.org/donate

The family of Richard James Kohnle created this Life Tributes page to make it easy to share your memories.

Send flowers to the Kohnle family.