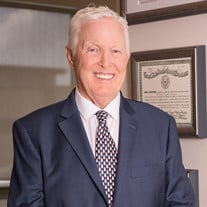 Dr. Richard Dennis Morgan, 76, of Lubbock, Texas, went to be with the Lord on November 23, 2020. He passed away peacefully, wrapped in the love of his family and his Lord, Jesus Christ. Richard was born on December 17, 1943, in Bay City, Texas, to Robert E. and Cora (Walker) Morgan. He obtained his Doctor of Dental Surgery degree from the University of Texas Dental Branch in Houston after attending Sam Houston State University. His servant heart and love of country moved him to then join the U.S. Army Dental Corps as a Captain. After a tour in South Vietnam, Richard returned home and opened his dental practice in Lubbock. Throughout his career, he was an active member of multiple professional organizations, including the American Dental Association, Texas Dental Association, South Plains District Dental Society, The Seattle Study Club, and the International Congress of Oral Implantologists. Richard connected with the Lubbock community first and foremost through his devotion to St. Paul’s Episcopal Church, where he served on the vestry and as a member of the lay readers team. However, the love he had for his many friends spread through multiple other areas as well, including by being a member of the Lubbock Rotary Club and a member of the ‘Noon Group’ with his favorite golf buddies at Lubbock Country Club. Richard was a man of intelligence, integrity, strength, kindness and humor. He was the very definition of a servant leader. Jesus Christ served as Richard’s model of inspiration, manifesting through his obvious and limitless devotion to self-sacrifice and putting others ahead of himself. Helping all of his dental patients, regardless of resources, was a critical passion to which he dedicated a huge part of his energy and life. Watching them genuinely smile after being in his care blessed him beyond measure. Above all, Richard was a dedicated and loving husband and devoted father. His family was the divine gift that lifted him every day and filled his heart with joy. Early in life, many called him “Sunshine”. To know him was to understand why. His perpetual happiness and love for others will be missed by so many throughout our community. Richard is survived by his wife of 34 years, Pamela (Fox) Morgan; four daughters, Kira Jennis (Morgan) McKeown of Castle Rock, Colorado, Claire Nicole Morgan of Lubbock, Texas, Gabrielle Colleen Morgan of Dallas, Texas, and Kathryn Marie Morgan of Lubbock, Texas; son Paul Edward Morgan and his wife, Kendall Wren of Kingwood, Texas; sister Cora Louise (Morgan) Jackson and her husband James of Houston, Texas; two brothers, Robert Edward Morgan and his wife Wanda of San Antonio, Texas, and Donald Allen Morgan of Houston, Texas; as well as his grandchildren Samantha Rose (Davis) Hepler, Robert Paul Erwin, Joseph Wylie McKeown, Meredith Rose Morgan, Kaitlyn Wren Morgan, and Ava Marie Sweeney. The funeral service will be held at 11:00 am on Tuesday, December 1, 2020 at First Methodist Church, which is at 1411 Broadway, Lubbock, Texas. Honorary pallbearers will be Bob Craig, Scott Porter, Everett Seymore, Holly Holder, Brad Morris, Jim Douglass, Johnny Fisher, Gerry Maddoux, Pieter Bergstein, Karim Santiago, Larry Petree. The Morgan family extends its heartfelt appreciation for the incredibly empathic care that was provided to Richard by Dr. Larry Warmoth and Nurse Jennifer Dobachesky. In lieu of flowers, Richard’s family has requested memorial donations be made to the South Plains COVID-19 Response Fund at www.cfwtx.org/spneighbors.

Dr. Richard Dennis Morgan, 76, of Lubbock, Texas, went to be with the Lord on November 23, 2020. He passed away peacefully, wrapped in the love of his family and his Lord, Jesus Christ. Richard was born on December 17, 1943, in Bay City, Texas,... View Obituary & Service Information

The family of Richard Dennis Morgan created this Life Tributes page to make it easy to share your memories.

Send flowers to the Morgan family.