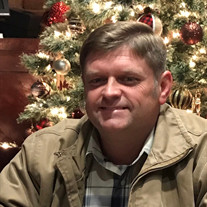 Sgt. Ricky Lee Eade Jr, 45, of Lubbock died Wednesday, December 9th, 2020. Ricky was born December 17th, 1974 in Lubbock. Ricky Lee graduated from Monterey High School and earned his Associates Degree in Applied Science from South Plains College. He started his law enforcement career in 1997 at Texas Tech University in patrol, later joining investigations and most recently serving as Administrative Sergeant. In addition to being a great law enforcement officer who would do anything to support his brothers in blue, Ricky was the epitome of a great family man. Every minute of his spare time was spent with his children and other family. Everything he did was for the good of his children, his family, his TTUPD family and his community. If you needed help wih anything at all you could always depend on Ricky. Survivors include his sons, Tyler Eade (fiancee Allison Hernandez) and Tanner Eade, parents Ricky Sr. and Amy Eade, brother Clifton Eade (Michelle), nephew Seth Lary, numerous aunts, uncles, cousins and friends and supporters too numerous to count. The family wishes to extend their heartfelt thanks and gratitude to all the caregivers at Univeristy Medical Center in Lubbock, Hermann Memorial in Houston, the Houston fireman that generously and honorably brought Ricky home to us, Ricky's TTUPD family for their support and guidance especially their care and concern for his children, and of course the outpouring of support from our great Lubbock community! Visitation will be Tuesday, December 15th, 6pm-8pm at Sanders Funeral Home. Memorial service will be Wednesday, December 16th, 1pm, St Luke's Lubbock Central Campus.

The family of Ricky Lee Eade, Jr. created this Life Tributes page to make it easy to share your memories.

Send flowers to the Eade family.