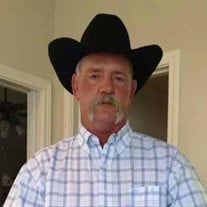 Ricky "Rick" Woods, age 67, passed away peacefully January 27, 2022 due to several medical complications. He was born September 26, 1954 in Raymondville, Texas to Gordon and Geneva Woods. He was married to the love of his life, Gena Woods, in March of 1978. Rick was loved by many people including family or friends that were considered family. His jokes and one liners constantly kept everyone on their toes. Rick devoted many hours volunteering for Habitat for Humanity. His love of woodworking and tinkering with things kept him busy during the early part of his retirement. He was an avid bowler and at one point bowled five nights a week. Both he and Gena were staples in and around the bowling community. Rick had several careers after discharge from the United States Army. Earliest family remembrance is him working for Crockett Pump pulling water wells in and around Morton, to his last career as a Diesel Mechanic for BAR Transport in Lubbock. He was a graduate of Morton High School in 1973. Rick is survived by two brothers, Charlie Woods of Morton, Texas and Wayne & Margie Woods of Levelland. Three children, Michael & Twyla Spinelli of Gage, Oklahoma; Chris & Lisa Woods of Cameron Park, California; Rikki & Cody Meiers of Lubbock, Texas. He has 7 grandchildren, Jessica, Dalton, Savana, and McKensi Spinell,; Bryar Woods, Kaitlyn & Kamdyn Meiers. Also three great grandchildren. He is preceded in death by his parents, Gordon & Geneva Woods of Morton, Texas;, Sister, Paula Lavender of Morton, Texas; Brother, Carl Woods of Lubbock, Texas; Wife, Gena Woods of Lubbock, Texas, and son, John Allen King of Nacogdoches, Texas. A visitation will be held at Sanders Funeral Home 1420 Main St, Lubbock, TX on Sunday, January 30th, 2022 at 1:00 pm. Graveside service will be on Monday, January 30th, 2022 at the Morton Memorial Cemetary at 11:00 am.

Ricky "Rick" Woods, age 67, passed away peacefully January 27, 2022 due to several medical complications. He was born September 26, 1954 in Raymondville, Texas to Gordon and Geneva Woods. He was married to the love of his life, Gena Woods, in... View Obituary & Service Information

The family of Ricky Frank Woods created this Life Tributes page to make it easy to share your memories.

Send flowers to the Woods family.