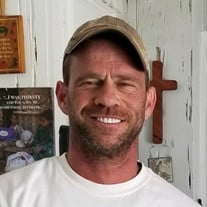 Robert Edward Medley passed away on February 20, 2021, from an unexpected heart complication at Texas Tech University Medical Center in Lubbock.  He was only 47 years old.  Robert was a caring son, brother, and friend.  Robert was the third child born to Dr. Gene and Martha Medley on October 12, 1973. He was born and raised in Lubbock, Texas. He attended Monterey High School and became the owner and operator of two local businesses in Lubbock.   Through his fearlessness and skill, Robert will forever be known as “The Tree Guy.” Robert was passionate about helping others and wanted the best for his friends and family.  He volunteered his time and served as a sponsor to many at the Hub of the Plains.  Robert was fearless in all aspects of his life, ranging from trimming the highest of trees to protecting the ones he loved.  Robert is preceded in death by his father, Dr. Gene Medley, and survived by his mother, Martha Medley, of Lubbock, his sister, Gena and Mike Smith of Humble, his brother, James and Melinda Medley, of Lubbock, three nieces, two nephews, and his friend, Betty Arnold of Lubbock.  In lieu of flowers the family is asking for donations to be sent to Lakeridge Baptist Church, 4601-82nd Street, Lubbock, Texas, 79423, as a memorial for Robert to go towards the Hub of the Plains, AA.  Philippians 4:11-13  11 I am not saying this because I am in need, for I have learned to be content whatever the circumstances. 12 I know what it is to be in need, and I know what it is to have plenty. I have learned the secret of being content in any and every situation, whether well fed or hungry, whether living in plenty or in want. 13 I can do all this through him who gives me strength.

Robert Edward Medley passed away on February 20, 2021, from an unexpected heart complication at Texas Tech University Medical Center in Lubbock.  He was only 47 years old.  Robert was a caring son, brother, and friend.  Robert was the third... View Obituary & Service Information

The family of Robert Edward Medley created this Life Tributes page to make it easy to share your memories.

Send flowers to the Medley family.