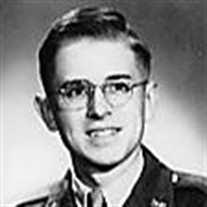 Ross Wyatt Hester reluctantly departed his earthly life on August 12th, just eleven days short of his 97th birthday. He was eagerly looking forward to it, but a case of Covid and a subsequent fall and fracture interrupted his plans. Surely there was joy and thanksgiving - and hopefully a party in his honor - among the saints on high when he arrived at the pearly gates. Ross loved living. He raced sports cars until his wife convinced him it was an inappropriate avocation for a father of five. He was a formidable tennis player, even after hip replacement, and skied the expert runs in Summit County in Colorado into his seventies. He was an excellent ballroom dancer and a sly bridge player. He was an avid bibliophile who had read the complete works of Shakespeare. He was an enthusiastic traveler - three trips to Italy were among his favorite vacations. He liked to entertain, and nothing pleased him more than to slowly cook his special beef brisket for a crowd of extended family and friends. Ross was a third-generation Presbyterian, baptized and confirmed at First Presbyterian Church in Lubbock. He was a founding member and a ruling elder of Covenant Presbyterian Church, where he had membership at the time of his death. His Christian faith played a primary role in his life; he was committed to his daily devotional, to regular worship attendance, and to love of God and neighbor. Ross was born in Amarillo on August 23, 1924, to Wyatt Langford Hester and Nettie Estelle Horne Hester. He was the oldest of three boys, and he remained close to his brothers, Carl Thomas and David Russell, until their deaths in 2016 and 2018. The family moved to Lubbock when Ross was four years old, where his father established Hester's Office Furniture and Supply Company. Upon graduation from Lubbock High School in 1941, Ross enrolled at Texas Tech College, then enlisted in the Army when the United States entered WW II. His assignments took him to India in 1944 and to China in 1945, and he talked often about his experiences in both countries. He returned to Lubbock in January of 1946 after honorable discharge and enrolled at Austin College in Sherman, Texas that summer, graduating in 1947. He proudly served as Trustee for his alma mater from 1987 to 1999, received a Distinguished Alumnus Award in 1984, always wore an Austin College tie and clip, and on occasion delighted his grandchildren with his "Fear the Roo" t-shirt. After graduation he returned to Lubbock to work with his father at Hester's. He married Elizabeth (Betty) Ruth Hobbs in 1948, and they started their family a year later. In 1958 Ross and Betty, together with their friend Dick Crandall, founded Caprock Business Forms, Inc., a wholesale manufacturing business with customers throughout the Southwest. Caprock remained in continuous operation until it was sold in 2018. Despite the demands of business ownership Ross found time for involvement in his children's activities - coaching softball, attending Little League baseball games, organizing camping trips and roller-skating expeditions. When he retired from Caprock at age seventy and turned the business over to his son, Steve, Ross pursued his life-long dream of owning a bookstore. Hester Books was a labor of love for Ross. He personally built bookshelves for 180,000 used books, and relished cataloging and shelving them. But visiting with customers was the thing he most enjoyed. His daughter Renée assumed ownership of the enterprise in 2008. During his business career Ross was a member of the Lubbock Caprock American Business Club, serving in various leadership roles, including president. He also served as president of the Texas chapter of Printing Industries of America, a non-profit trade association which formerly advocated for the United States printing industry. From 1992 to 1998, he and Betty and their children, together with her sister and brother-in-law, Mary and Max Allen, and their children Melanie and Mark, developed Fountainwood Estates in Georgetown, Texas. A few years after Betty's passing in 2011, Ross moved to independent living at Carillon, and was in assisted living there at the time of his death. He is survived by his children, Sherry Hester Kenney (Andy), Randal Ross Hester (Lyn), Renée Hester, Stephen Keith Hester (Olive), and Jeffrey Wyatt Hester (Jan); his grandchildren, Boyd Wyatt Fisher (Jean), Thomas Langford Hester (Callie), Lauren Elizabeth Kenney Berv (Alex), Clara Elizabeth Hester, Neil Randal Hester, and Lilien Aurora Hester; and his great-grandchildren, Thomas Langford Hester, Jr., Elizabeth (Birdie) Beilman Hester, Cece Anne Hester, and Stella Irene Berv. He is also survived by his brother David's daughters, Tina Hester (Bob Garrett) and Karen Hester, his great-nephew Wyatt David Garrett, and by his cousins. He is also survived by Betty's dear siblings, nieces and nephews, and great-nieces and nephews. The family wants to thank all those who provided care and support to Ross, and to them, at the end of his life. A memorial service is scheduled for Saturday, September 4th, at 11:00 a.m. at Covenant Presbyterian Church, located at 4600-48th Street. The family respectfully requests that all attending wear masks. In lieu of flowers please consider a donation to Covenant Presbyterian Church, The Salvation Army, South Plains Food Bank, or a charity of your choice.

Ross Wyatt Hester reluctantly departed his earthly life on August 12th, just eleven days short of his 97th birthday. He was eagerly looking forward to it, but a case of Covid and a subsequent fall and fracture interrupted his plans. Surely there... View Obituary & Service Information

The family of Ross Wyatt Hester created this Life Tributes page to make it easy to share your memories.

Send flowers to the Hester family.