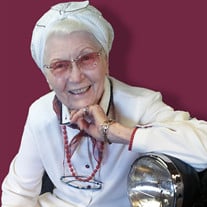 Ruby Inez Spencer was born in April of 1923, in a community that no longer exists called Fulbright, Texas. The nearest town to there is Bogata, Texas, twenty-five miles from the fabled city of Paris, Texas. She went to be with the Lord on December 29, 2020, at the young age of ninety-seven-years-old. For Ruby there were only three things worth her time and attention: God, her family, and work. Over the course of her life she was a faithful churchgoer and worked doing fundraising, door knocking/ outreach, but what stood out was her ability to show Christ to others without words. Her family was always so important to her, but in her late years they became even more precious to her. She doted over her pictures of one or the other of her loved ones. Then there was her work. Ruby had many successes as a working woman. She was a national sales woman for the Dillard’s Co. And, being the number 3 seller in all the USA, her picture hung in the business offices of many of the Dillard’s stores. She also enjoyed her work as a dental assistant in the office of Dr. Noel Williams, and later in life she found enough prestige in the business of Home Health Caregiving to work privately for select clients. With a bigger than life personality, she was successful in anything she put her hand to do. Ruby was preceded in death by her parents; Bazil and Ivey Hackler, her brothers; Loren, Newt, James, David and Steven Hackler; and her husband of forty-five years, Eugene Ben Spencer. She is survived by her two children, Barbara Holik and her husband George Holik, Dan Spencer and his wife Mary Spencer; her five grandchildren Pamela Atkinson and her husband Chris Atkinson, Robin Suttle, Lacey Raschke, Crystal Rollo and her husband Ben Rollo, and Sean Spencer; nine great-grandchildren Michael Terry and his wife Christy Terry, Jennifer Hargrove, Jamie Mills and her husband Jeremy Mills, Alex Atkinson, Jessica Andrea and her husband Skylar, James Hampton, Jody Raschke, Astrid Rollo, and Adalynn Rollo, as well as, eight great-great-grandchildren. Ruby was a resident of the Garrison Care Center at the time of her passing. She will not only be missed by her family but by the great number of people she called her friends and acquaintances. Viewing and fellowship will be on January 18th from 5:00 pm to 7:00 pm at Sanders Funeral Home 1420 Main Street, Lubbock, Texas. Funeral proceedings will be 1:00 pm on January 19th at Rock City- Event Center 5911 4th Street, Lubbock, Texas. For a video link to the service, please email your request to [email protected] Online viewing will be limited.

Ruby Inez Spencer was born in April of 1923, in a community that no longer exists called Fulbright, Texas. The nearest town to there is Bogata, Texas, twenty-five miles from the fabled city of Paris, Texas. She went to be with the Lord on December... View Obituary & Service Information

The family of Ruby Inez Spencer created this Life Tributes page to make it easy to share your memories.

Ruby Inez Spencer was born in April of 1923, in a community that...

Send flowers to the Spencer family.