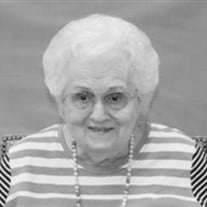 Ruth Overton Carlock of Lubbock, Texas died on July 17, 2021 at her home in Belle Court South at Carillon. She was born in Lubbock and was the daughter of Dr. and Mrs. M.C. Overton. She attended public schools and graduated from Lubbock High School. Ruth attended Randolph-Macon Woman's College in Lynchburg, Virginia and graduated from the University of Texas at Austin. After completing college, she flew as a Pan American Airways stewardess for three years, in the Latin American and Pacific Divisions. In 1947, she married Watson Carlock in Lubbock. Ruth earned an MA in Spanish at Texas Tech and taught bilingual classes for the Lubbock Independent School District after her children were mostly grown. She was a loving wife and mother and she had many talents and interests. Ruth and her husband, Watson, enjoyed many years of travel together. Ruth was a member of St. Paul's On-the-Plains Episcopal Church. She was a member of Kappa Alpha Theta Fraternity and many service organizations: the Junior League of Lubbock, the Lubbock Women's Club, the West Texas Museum Association, the Lubbock Heritage Society, the Ranching and Heritage Association, Friends of the Library, the Lubbock Area Foundation, and the Century Club of Texas Tech Ex-Students. Ruth's husband, Watson, a son, Bill Carlock, a daughter, Paula Carlock and great-grandson, Wyatt Vaughan Messer preceded her in death. She is survived by two daughters, Patricia Tilton of Lubbock, and Catherine Doherty of The Woodlands, Texas, a son, David Overton Carlock of San Antonio, and seven grandchildren, Julie Anne and David Tilton, Greg Vaughan and Emily Vaughan Messer, and Brady, Carly, and Laura Kate Carlock. A private graveside Memorial Service will be held on August 2, 2021. Ruth will be buried at the Cemetery of Lubbock. In lieu of flowers, memorials may be made to the M.C. Overton Memorial Fund at Covenant Hospital, to The Team Carillon Fund at Carillon Foundation, or to The foreHadley Foundation for CDH (Congenital Diaphragmatic Hernia) Research.

Ruth Overton Carlock of Lubbock, Texas died on July 17, 2021 at her home in Belle Court South at Carillon. She was born in Lubbock and was the daughter of Dr. and Mrs. M.C. Overton. She attended public schools and graduated from Lubbock High... View Obituary & Service Information

The family of Ruth Carlock created this Life Tributes page to make it easy to share your memories.

Send flowers to the Carlock family.