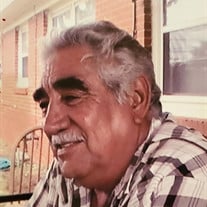 Santiago Nerios Sr., 76, of Lubbock, Texas passed away peacefully on August 6, 2021 surrounded by his loved ones. Santiago was born July 24, 1945 in Pharr, Texas to Pedro Nerios, Jr and Mercedes Medellin Nerios. Santiago grew up in a big family. He was the 2nd to the oldest of 10 siblings. He had 6 brothers and 4 sisters, Pedro III (deceased), Jesse, Dolores (deceased), Ernesto (deceased), Rita, Enrique, Mercedes, Eliseo (deceased), Jose, and Juanita. He was formerly married to Benita for 25 years. During their marriage, they had 3 daughters and 1 son. His children include daughter Belisa Waldrop (Brent), daughter Sarah Nerios, son Santiago Nerios, Jr. and daughter Angelica Loya (Andrew). He had 7 grandchildren, Danielle, Sonya, Stern, Gabrielle, Santiago III, Addison, and Sabian. He had 4 great-grandchildren, Ezra, Ezavyer, Zaide, and Zoe. In his younger days, he worked for Colonial Stone for several years. He moved on to Acme Brick where he retired from after 20 plus years. Santiago was full of life and laughter. There was never a dull moment with him. He was a jokester and a great storyteller. He had a grand infectious smile. He loved fishing, shooting his collection of firearms, gardening, cooking, or just shooting the breeze. He spent his days with his family and friends. He also loved spending time with his friends down at the local flea market. He always had some household project. He was a builder and a very innovative thinker. He was always ready to lend a hand or give advice to anyone needing help. He had so many plans after retirement but his health forced him to put those plans on hold. He was such a strong beautiful man with a big heart. He was a loving father, grandfather, brother, and uncle. He fought a good fight but eventually succumbed to the inevitable. He was loved by so many. He will be so dearly missed every single day. A celebration of his life will be at Sanders Funeral Home Thursday, August 12th, 2021 at 10:30am with Caleb Orellana officiating. A private burial will be held at the City of Lubbock Cemetery at a later time where he will be laid to rest with his late father. Please celebrate the life of Santiago by visiting www.sandersfuneralhome.com. A webcast of services will be available as well as our online guest book.

Santiago Nerios Sr., 76, of Lubbock, Texas passed away peacefully on August 6, 2021 surrounded by his loved ones. Santiago was born July 24, 1945 in Pharr, Texas to Pedro Nerios, Jr and Mercedes Medellin Nerios. Santiago grew up in a big family.... View Obituary & Service Information

The family of Santiago Nerios created this Life Tributes page to make it easy to share your memories.

Send flowers to the Nerios family.