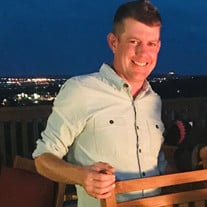 Scott Corley, 42, of Lubbock, TX passed away March 5, 2022. Scott Allen Henry Corley, son of Steve and Rebecca Corley was born on February 7th, 1980, during a severe blizzard. Scott has been our "Snow Baby" ever since. He attended Kersey-Mecham Pre-school, Roscoe Wilson Elementary, Hutchison Jr. High and graduated from Lubbock High School in 1998 where he enjoyed gymnastics and art. Scott had many life-long friends from early days in Lubbock. He was voted the "coolest" first grader at Roscoe and never made an enemy. His kind heart and dislike of any kind of harassment or bullying made him a friend to many. His first job experiences were in food service. At fourteen he went to work part-time in the kitchen at Kyle Abernathie's 88 Key Cafe in the Depot District. From there he would go on to many other chef venues. He had developed a love of the outdoors as a young Boy Scout. He loved camping, hiking, climbing, fishing, skiing, and especially skateboarding with his pals. He enjoyed the sports of golf, gymnastics, diving, basketball, baseball, soccer; mostly to spend time with his brothers and friends. The mountains of Colorado were his happy place and dreamed of climbing ALL the 1400ft. peaks in the state. He did make of few of the summits. He also cherished his family golfing vacations in Florida, The Masters, and of course Ruidoso in the rain. A July trip to St. Andrews will be missing Scott as Dad and Brent tour the Old Course and play a round in Scotland. The apples of his eye are his twin daughters 12-year-old Harper Rae and Riley Quinn. Being Dad was his all-time favorite job. They became outdoor enthusiasts as they canoed, fished, hiked, skied and explored the woods and hills with Dad. They have a passion for the study of plants and animals. The have learned to be loving and kind to all of God's creatures modeling their dad's love of nature. Scott was a man who loved his family, his country, and was rediscovering his spiritual life as he struggled through illness and recovery. His death will leave a big hole in the hearts of all who knew and loved him. Many have their own stories of enjoying life with Scott Corley. We will miss his company while resting assured that Scott has found the greatest mountain range, forest trail, ocean wave, river rapids, golf course and skate park that we can ever imagine.

Scott Corley, 42, of Lubbock, TX passed away March 5, 2022. Scott Allen Henry Corley, son of Steve and Rebecca Corley was born on February 7th, 1980, during a severe blizzard. Scott has been our "Snow Baby" ever since. He attended Kersey-Mecham... View Obituary & Service Information

The family of Scott Allen Corley created this Life Tributes page to make it easy to share your memories.

Send flowers to the Corley family.