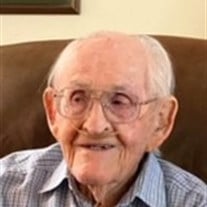 Steve Benton Meinecke of Lubbock, TX passed away on December 16th, 2020. Born January 31st, 1926 to parents, Adlia and Leta Meinecke. Steve and his brother, Charles, grew up on 19th Street in Lubbock, TX. After graduating from Lubbock High School in 1943, Steve continued his studies at Texas Tech University where he eagerly signed up for ROTC in anticipation of joining the war effort. Steve joined the U.S. Army and served in the 272nd Infantry Regiment in Europe. His service in the war was one of his proudest achievements. After the war, Steve married the love of his life, Jeanette Hamilton in 1948 and was a loving father to their four children. Steve continued his education on the GI Bill and earned a Bachelor of Science in Chemistry from Texas Tech University in 1949. Steve joined his father and brother in the family business at Meinecke Bros Hardware store, located on Broadway in Lubbock, TX. Steve and Jeanette were active members of the United Methodist Church of Lubbock. Enjoying their Sunday School class, the Homebuilders. Steve enjoyed working with the Boy Scouts of America Troop 402 for more than 25 years, earning the Silver Beaver award for his service. In his retirement, Steve was an avid gardener and active member and researcher for the South Plains Genealogy Society. Through his many years of research, he significantly extended and documented the Meinecke and Benton family trees. He also enjoyed volunteering with Friends of the Library for over 20 years. He was very creative and fine-tuned his skills in drawing, handcrafts and woodworking. Steve deeply enjoyed spending time with his family. Sharing stories of his youth and reflecting on the memoir or historical non-fiction book he was reading. His favorite subjects were history and nature. Steve is survived by his wife, Jeanette and their children and spouses Robert and Nancy Meinecke of Lubbock, TX; Yvonne Saffer of Denver, CO; Jon and Donna Meinecke of Denton, TX; and Lesa and Paul Hipes of Westmont, IL; 8 grandchildren and 5 great grandchildren. Steve is preceded in death by their beloved son, Larry Meinecke. Steve was kind, generous, and ever ready to share a story; he will be sorely missed.

The family of Steve Benton Meinecke created this Life Tributes page to make it easy to share your memories.

Steve Benton Meinecke of Lubbock, TX passed away on December...

Send flowers to the Meinecke family.