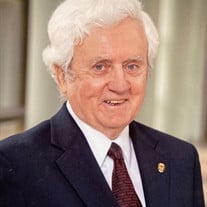 Thomas Francis McGovern (June 4, 1935 - March 21, 2022) - a man called by God - son of the late James and Rita McGovern, formerly of The Green, Cashel, Tipperary. Predeceased by his sisters Carmel, Helen and Mary, will always be remembered and never forgotten by his family in Ireland and the UK - sisters Vera, Claire and Imelda. His brothers Jimmy, Albert and Martin. His nephews, nieces, grandnephews, grandnieces and his extended family and friends will always remember him fondly. As a young priest Tom was brought to West Texas by the Amarillo Diocese of the Roman Catholic Church. He was the proud husband to Toni, father to Lexie (and husband Miguel) and grandfather to Mariluna, Esperanza, and Tomás. McGovern was a professor emeritus of psychiatry and director of the Center for Ethics, Humanities and Spirituality at Texas Tech University Health Sciences Center, where he spent more than 40 years of his career. No one has gone through TTUHSC Center and Medical School without knowing and being supported by Dr. McGovern. His relationships know no bounds. In the cafeteria at the Health Science Center he spoke with everyone and was spoken to by all. He held space for everyone equally, from custodial & food preparers, to nurses, doctors, Directors, and Presidents. Sharmila Dissanaike said of Dr. McGovern, "no one knew what his job description was. It didn't matter, because his real job was being the beating heart of TTUHSC (& beyond)." Dr. McGovern is the founding editor of the Alcoholism Treatment Quarterly which he oversaw for the past 30 years. Current co-editors Susan Bergeson and Regina Baronia said of Tom: "It was with God in his heart that he saw the best in everyone. Over his many years in recovery, he championed the cause of treatment and recovery for people with Alcohol and Substance Use Disorders. He had a passion for helping people, especially the marginalized. He made Regina and me better humans. He ultimately saved many lives and will be celebrated and missed by many. We will carry on the work that he did at ATQ, with your (researchers in addiction and recovery) continued assistance." Many in our community recognize Tom's lilting Irish voice as the host of the radio program, Faith Matters, which he hosted for the last four years on KTTZ-FM 89.1. An exquisite interviewer who helped every guest (from the novice to veteran) feel right at home and comfortable behind the microphone. Any memorial service that was held in this area over the last 40 years had a strong chance that Tom would lead the proceedings with his gentle caring demeanor. His daughter Lexie recalls that her daddy taught her the skill of starting every event on time and ending early. He was a master MC and knew how to conduct an agenda keeping an event moving along. Along with Christopher Smith, Tom was the Master of Ceremonies at A Celtic Christmas and invariably he would interject a little Gaelic into the proceedings. Tom had 47 years of active participation in the recovery community. He was comfortable openly sharing his struggles and the gift that his recovery provided him to give back to others who struggled. Tom was a huge sports guy. He played soccer well into his 50s and often boasted of bringing soccer to West Texas. As a boy and young man, he played Irish hurly. closely followed Texas Tech sports and the Dallas Cowboys. He was often known to have lit a candle to bring Divine Intervention when "the Boys" were struggling. McGovern made friends wherever he was. He felt an instantaneous connection with anyone working along his path. He would ask their name, where they were from, about their family, and take a genuine interest in their life. He would follow up with them the next time he saw them. Tom had the ability to be with people at their weakest/darkest moments. He loved them unconditionally and accepted whatever they were going through fully. "Our dear Tom" will be missed by many people in diverse groups throughout our community. May his gentle soul rest in peace. "In iothlann Dé, Go dtugtar sinn" Memorial Mass will be held at 2:00 p.m. Saturday, March 26, 2022 at Saint John The Baptist Catholic Church with Monsignor David Cruz officiating.

Thomas Francis McGovern (June 4, 1935 - March 21, 2022) - a man called by God - son of the late James and Rita McGovern, formerly of The Green, Cashel, Tipperary. Predeceased by his sisters Carmel, Helen and Mary, will always be remembered... View Obituary & Service Information

The family of Thomas Francis McGovern created this Life Tributes page to make it easy to share your memories.

Send flowers to the McGovern family.