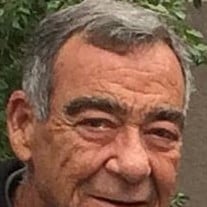 Thomas "Tom" B Moore, 73, passed away on March 31, 2021, in Lubbock, Texas, his birthplace and long-time home. Tom was born on August 12, 1947, to George T. Moore and Ruby Moore, née Mauldin. He was the eldest of three brothers. He graduated from Lubbock High School and attended Texas Tech University for two years before enlisting in the United States Air Force. While in the Air Force, he met Carla Howard while they were both working part-time at Pizza Hut. They were married in Abilene, Texas, on August 23, 1969. Upon completing his military service, Tom and Carla moved to Lubbock, where he completed a degree from Texas Tech. He took a job with Swift and Company in San Antonio and moved several times before returning to Lubbock in 1976. Tom then worked for AT&T/Southwestern Bell until he retired. Tom volunteered throughout his life for different organizations, including the Telephone Pioneers Association, the Muscular Dystrophy Association, the Boy Scouts of America, and Friends of the Lubbock Library. For 17 years, he served as an advisor for the Beta Sigma Chapter of Alpha Phi Omega, a brotherhood that he cherished. Tom also represented his fellow telephone workers as an elected member of four bargaining teams for the Communication Workers of America (CWA). He felt deeply the importance of service and a sense of fairness. Tom was a loyal friend to many and a stranger to none. He appreciated music and enjoyed telling and retelling band stories from Lubbock High and Texas Tech. He loved his family and was very proud to be a Papaw to his grandchildren. Tom was predeceased by his parents and brother Paul Moore. He is survived by his wife, Carla Moore; son Thomas "Thom" Moore and wife Stephanie of Colorado Springs, Colorado; daughter Gwendolyn Moore of Lubbock; grandchildren Anna Moore and Nathaniel Moore of Colorado Springs; brother David Moore and wife Karen of Garland, Texas. Sanders Funeral Home will direct services. The family will receive visitors on Monday, April 5, 5:00-6:30pm. A funeral service will be held Tuesday, April 6, at 1:00pm with burial following at Resthaven Memorial Park. The family requests for those attending to wear masks. In lieu of flowers, the family would be honored by a donation to your nonprofit of choice.

Thomas "Tom" B Moore, 73, passed away on March 31, 2021, in Lubbock, Texas, his birthplace and long-time home. Tom was born on August 12, 1947, to George T. Moore and Ruby Moore, née Mauldin. He was the eldest of three brothers. He graduated... View Obituary & Service Information

The family of Thomas "Tom" B Moore created this Life Tributes page to make it easy to share your memories.

Send flowers to the Moore family.