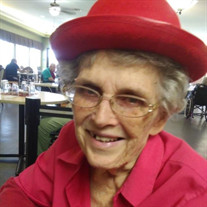 Services for Dr. Virginia Ann Butler Harris, 89, of Lubbock, will be at 1:00 p.m. on Friday, November 20, 2020 in the Chapel of First Baptist Church in Lubbock, Texas. Virginia died early on the morning of Tuesday, November 10, 2020, after a battle with Covid-19. Just two weeks earlier, she had been able to visit with her son, Peter Harris. Before she passed on, her daughter and granddaughter, Elizabeth Harris Willett and Hannah Willett, were also able to visit her. Virginia Ann Butler was born on December 17, 1930, in Pampa, Texas. Her parents were Samuel Walter Butler and Dixie Virginia (Cullum) Butler. She had a younger sister, Beth. The Butler family moved to Lubbock in 1937 to provide educational opportunities for their daughters. Virginia was Valedictorian of her Lubbock High School graduating class of 1948. Virginia graduated from Texas Tech University with a Bachelor's of Science in Education in 1952, and became a 2nd grade teacher for the Lubbock Independent School District. She continued in school and received a Master's of Education in 1955. Just before graduation, she married Harold Harris on July 16, 1955. The two had sat in adjacent rows in freshmen English class at Tech. Their love stayed true for almost 62 years, until Harold's death on March 14, 2017. Virginia left teaching to have her son, Peter Harris, on June 15, 1961. Her daughter, Virginia Elizabeth Harris, followed on December 13, 1963. She became a Nannah when Elizabeth's daughter, Hannah Elizabeth Willett, joined the family on November 10, 2002. Virginia returned to Texas Tech in the mid-1970s to bolster her elementary-education credentials. Her professor pushed her to get a doctorate in education, which she completed in 1980. Virginia worked as a professor of elementary education at Tech in 1980-86; at Lubbock Christian University in 1986-87; and at Wayland Baptist University from 1987 to 2014. Her specialty was developing reading skills in children. Virginia was a member of First Baptist Church all of her life in Lubbock. For over 50 years, she was a teacher of Sunday school for 2-3-year-olds. Often she taught the children, or even the grandchildren, of her former charges. She made many enduring friendships through the church, her job, and her neighborhood. Many of Peter and Elizabeth's friends became her friends as well. Virginia's sister Beth died in 2004. Survivors include her son, Peter Harris of Lubbock; daughter, Elizabeth Harris Willett, son-in-law Edwin Willett, and granddaughter Hannah Willett, all of Weatherford.

Services for Dr. Virginia Ann Butler Harris, 89, of Lubbock, will be at 1:00 p.m. on Friday, November 20, 2020 in the Chapel of First Baptist Church in Lubbock, Texas. Virginia died early on the morning of Tuesday, November 10, 2020, after... View Obituary & Service Information

The family of Virginia Ann Harris created this Life Tributes page to make it easy to share your memories.

Send flowers to the Harris family.