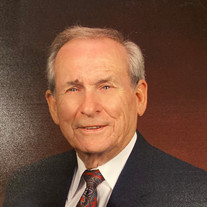 Weldon served faithfully God, his country, and his sweetheart of 69 years, Dorothy, who went to heaven three years ago. His moral compass was his touchstone for his two sets of twins, grandchildren and their children. Weldon was born to W.R. and Gussie Adams in Ropesville, Texas. He attended schools in Lubbock, including Texas Tech prior to enlisting in the Navy and served honorably with Fleet duty. Anyone that met Weldon knew he was a man of principle and he believed “if a thing was worth doing, it was worth doing well.” Whether he was working with his clients, tinkering with his tools in his workshop, flipping pancakes with his fellow Lions, taking his children on roadtrips to teach them about history or enduring endless piano recitals, his mantra was “if it was worth experiencing, it was worth putting aside time for.” He packed his 94 years with love for the arts, photography, fishing, travel, cigars and bulldogs. He was the most proud of the title “Grampy” a moniker his three grandchildren and their children bestowed upon him. He was President and owner of Lubbock Investment Corporation and Adams Insurance Agency and simultaneously devoted his talents to the South Plains Lions Club, Lubbock Boys and Girls Club, the Masonic Lodge, Shriners, Meals on Wheels and First Baptist Church. He was the happiest when he was home at Adams Haus, his cabin in the woods, playing games, and 42 with family and friends. His family rejoices in his return on January 8th to his Maker and his mate, Dorothy. His parents and his sister, Wilma Huckabay and his brother, Lee Adams, all of Lubbock predeceased him. He leaves behind siblings, Fred Adams and sister, Peggy Johnson both of Lubbock. His legacy lives on in his four children and their spouses; Connie (Don) Kelley, Weston Lakes, TX, Vickie (Mike) Brown, Perkasie, PA, Brenda (Wade) Wilson, Lubbock, TX, Brent, Perkiomenville, PA, three grandchildren and six great-grandchildren. Graveside services will be held 11:00 a.m., Friday, January 15, 2021 in the City of Lubbock Cemetery. Weldon may be honored and remembered with donations to the Shriners Hospitals for Children, www.shrinershospitalsforchildren.org or Lubbock Boys and Girls Club, www.lubbockbgc.org.

Weldon served faithfully God, his country, and his sweetheart of 69 years, Dorothy, who went to heaven three years ago. His moral compass was his touchstone for his two sets of twins, grandchildren and their children. Weldon was born to W.R.... View Obituary & Service Information

The family of Weldon Travis Adams created this Life Tributes page to make it easy to share your memories.

Weldon served faithfully God, his country, and his sweetheart...

Send flowers to the Adams family.