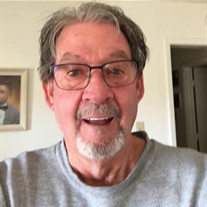 Wiley Jordan Pritchard III, 77, of Levelland, Texas, passed away on Thursday, July 8 at his home from complications of COPD. Jordan was born on October 28, 1943 to Wiley Jordan Pritchard, Jr and Sallie Allene Loveless Pritchard. He grew up in Lubbock and attended Lubbock High School. He began his military service in May 1968 in the US Army's 3rd Infantry Division. He trained in Fort Bliss and Fort Knox before being stationed in Germany from 1968 to 1970. Jordan worked as an auto mechanic and shop manager for most of his life in Lubbock and then pivoted to a career helping troubled teens where he spent the last 20 years of his career at Cal Farley's Girlstown, USA in Whiteface, Texas. He served as house parent, mechanic, voluntary fire chief, and Jack-of-all-trades. He created and organized the annual Tour de Nowhere Bike Tour that raised funds for the Levelland Volunteer Fire Department and Girlstown. He restored and maintained dozens of bicycles for the girls' at Girlstown and encouraged them to pursue a healthier and happier lifestyle outdoors. Many girls rode bikes around campus and joined in the Tour de Nowhere. He had a servant's heart and was always willing to help out anyone in need. This heart led him to positively impact a myriad of young women with his work and mentorship at Girlstown. Jordan was passionate with all things car related. He enjoyed tinkering on cars, attending car shows, talking about cars, and in his younger years racing his 'Green Frog' at the local Lubbock Speedway. In his later years, he purchased, restored, and enjoyed his 1928 Ford Model A hot rod. He often drove it and entered it in local car shows. He also enjoyed long bicycle rides, creating stain glass art (and sometimes merging these passions into bicycle art), watching sports, playing volleyball with coworkers, working out at the Levelland Junior College gym, and visiting with friends. Jordan is survived by his daughter Shana Pritchard Rose, (husband Karl) of Porter, Texas, son Joshua Pritchard of Parker, Colorado, grandson Jacob Rose of Allen, Texas, granddaughter Abigail Rose of Lubbock, Texas, sister Linda Pritchard Lucas (husband Danny) of Amarillo, Texas, nieces Velvet Lucas Knight (husband Jared) of Amarillo, Texas and Veronica Lucas Hatfield (husband BJ), of Amarillo, Texas, former spouses Ruby Miller of Lubbock, Texas and Rhonda Dunlap of Greenville, South Carolina as well as many cousins, great-nephews, and great-nieces. He was preceded in death by infant son Vance Jordan Pritchard, infant twin daughters Paula and Paige Pritchard, and his parents, Wiley and Allene Pritchard. The family would like to acknowledge Jordan's dear friends, Shirl Hancock of Levelland, Texas, and Stephen, Laura, and baby Hank Hougland of Levelland, Texas. They loved and cared for Jordan. He considered them family. Jordan was immensely proud of his children and grandchildren and told them often. They brought him great joy. He deeply loved his family and friends. Jordan lived a minimalist lifestyle and did not want for much. He desired a brief and no fuss funeral. The graveside service celebrating his life will be held on Wednesday, July 14th at 11am at The City of Lubbock Cemetery. In lieu of flowers, the family asks that donations be made to the American Lung Association or to the organization of your choice.

The family of Jordan Pritchard created this Life Tributes page to make it easy to share your memories.

Send flowers to the Pritchard family.