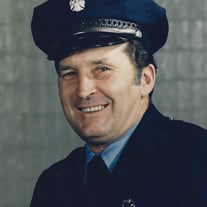 It is with a heavy heart that we announce that William Thomas Graham, age 83, went home to be with the LORD on Sunday, August 30, 2020. Graveside service to be held on Friday, September 18, 2020 at 10:00 A.M. at Peaceful Gardens Memorial Park with Leroy Green officiating. A memorial procession will begin from Sanders Funeral Home at 9:30 A.M. to the graveside. Will was preceded in death by his parents, one sister, and three brothers, and shortly after his passing, his wife Carol Graham passed away. He is survived by his three sons, Richard Graham - wife, Sandra Graham, Raymond Graham, and Ronald Graham, his daughter, Amy Parramore - husband, Mark Parramore, his sister, Myrtle Busby, and his five grandchildren, Lexie Graham, DeJon Johnson, Leanndra Parramore, Chris Parramore, and Brenna Wianecki. Will was born December 9, 1936, to George and Evline Graham and was one of six children. He was married to Laura Whisenhunt for 28 years until she went to be with the Lord; together, they had three sons. He later married Carol Leddy and was married for 33 years when he passed, she gave him his daughter. He served honorably in the U.S. Navy. He served as a firefighter with the Lubbock Fire Department for 28 years. Will enjoyed running Graham's Appliance Repair for over 40 years. Will was of the Christian faith and loved to share the good news, you could often find him enjoying the sunshine while he was carrying on a conversation with the LORD. Will loved all people and never met a stranger. He loved spending time with the family, RVing, racing cars, fishing, and going for a drive. He will forever be remembered and loved by his family and friends. I have fought the good fight, I have finished the race, I have kept the faith. Now there is in store for me the crown of righteousness, which the LORD, the righteous Judge, will award to me on that day - and not only to me, but also to all who have longed for His appearing. 2 Timothy 4:7-8

It is with a heavy heart that we announce that William Thomas Graham, age 83, went home to be with the LORD on Sunday, August 30, 2020. Graveside service to be held on Friday, September 18, 2020 at 10:00 A.M. at Peaceful Gardens Memorial Park... View Obituary & Service Information

The family of William Thomas Graham created this Life Tributes page to make it easy to share your memories.

It is with a heavy heart that we announce that William Thomas...

Send flowers to the Graham family.