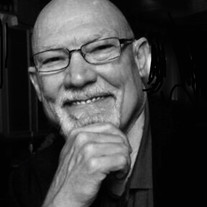 William Hamilton Lowell died peacefully at home on Monday, February 24, 2020 surrounded by his loving family and cherished dog, Bella. Family and friends will celebrate his life at a memorial service on Saturday, February 29, 2020 at 4 pm at St. Stephen’s Episcopal Church. Prior to the service, the family will receive visitors at 2:30 pm at the church. Bill was born January 31, 1944, in Miami, Florida, to Mary and Hamilton Lowell. He was the big brother to a sister, Betty, whom he loved dearly. Bill received an Associate’s Degree from Marion Military Institute, Marion, Alabama, in 1965 and a BA from the University of Alabama in 1968. A true patriot, Bill served in the Army in Gelnhausen, Germany 1968-1970. In the early 70s, Bill’s work as a Cotton Industry Specialist led him and his family to Lubbock, and he decided to make Lubbock his home. Upon receiving his General Securities Principal License in 1989, he was fortunate to actualize his true passion with the establishment of Lowell Wealth Management, his current financial advisory practice. As an outgrowth of this passion, Bill hosted a weekly PBS program entitled Viewpoint, a perfect combination of his love for the industry and of communicating. His passion for his business infused his daily life as his enthusiasm shone through any conversation regarding the financial industry. His television was consistently tuned to CNBC, and his laptop and charts were ever present whether at work, at home, or on vacation. It wasn’t work to him. He truly loved his job. Bill’s love for his work was only exceeded by his love for the people in his life. Diane was the love of his life. They enjoyed traveling together and with family and friends, making memories to last a lifetime. He adored her, and she was first in his mind and heart always. He was also an amazing Girl Dad before Girl Dads were cool. His love for Blake and her prominence in his life was unmistakable to all who knew him. His friends were family and held a special place in his heart. He treasured his time with them. His kindness and love for others radiated through his amazing smile, his twinkling eyes, and his infectious laugh. Those who knew him will always remember his “Bow Tie Fridays” and his affinity for great hats. He was a consummate gentleman and a cherished friend to so many. To know him was to love him. Bill enjoyed living in Lubbock and served on numerous community boards through the years including: Texas Tech Museum, LHUCA, Marion Moss Foundation, Civic Lubbock, Friends of Music of Texas Tech, American Cancer Society State Board, and the Texas Tech School of Nursing Graduate Advisory Board. Bill is survived by his wife of 54 years, Diane West Lowell; daughter Elizabeth Blakemore Lowell of McKinney and his sister Lelia Elizabeth Maverick of Fort Lauderhill, Florida. Additional survivors include his chosen children Martellena Espino-Barros and Foroozandeh (Kris) Nasserzadeh Nouri; and chosen grandchildren: Mairead Evelyn (Maggie), Caitlin Annice (Caiti), and Seaghan Thomas (Jack) Nolan. Bill was preceded in death by his parents. The family requests any memorials be made to LHUCA, Texas Tech University Friends of Music, St. Stephen’s Episcopal Church or the charity of your choice.

William Hamilton Lowell died peacefully at home on Monday, February 24, 2020 surrounded by his loving family and cherished dog, Bella. Family and friends will celebrate his life at a memorial service on Saturday, February 29, 2020 at 4 pm at... View Obituary & Service Information

The family of William Hamilton Lowell created this Life Tributes page to make it easy to share your memories.

Send flowers to the Lowell family.